3398. MAKE VIDEO. Singapore Wildlife. A rare photo of a juvenile brown anole puffing up its throat to intimidate me. The Oriental Garden Lizard. The Esplanade. 19 Aug 20

19 Aug 2020.Singapore wildlife at The Esplanade.
The brown anole (Norops sagrei) could have been introduced into The Esplanade - Theatres on the Bay, when plants are purchased from the Caribbean. 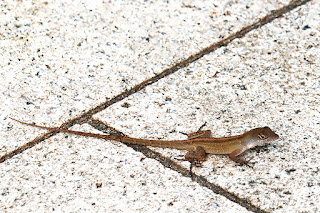 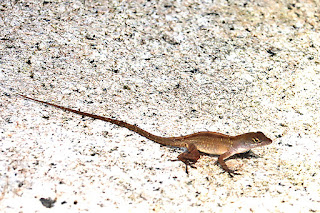 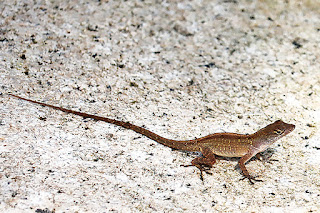 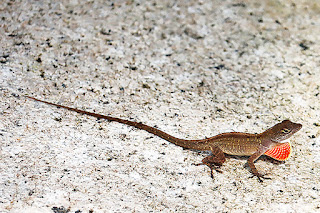 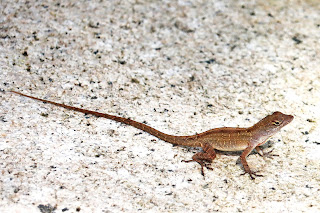 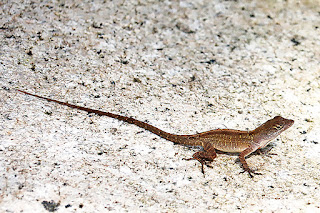 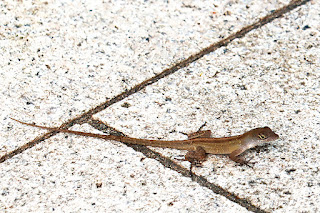 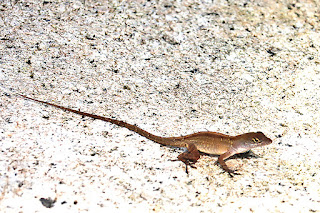 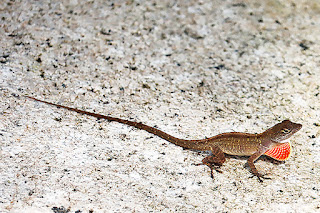 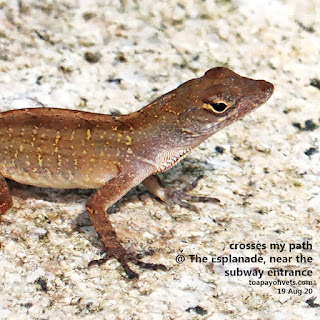 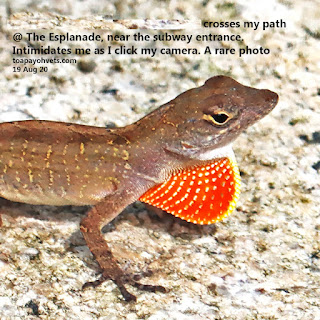 Anoles can live alone or in groups, but there should be no more than 1 male per tank. A male anole may display his dominance by bobbing his head and flaring his dewlap if he encounters a male rival or even if he sees his own reflection. ... Increase the tank size if there will be more than 1 anole.

Do lizards recognize their owners? Most reptiles do seem to recognize people who frequently handle and feed them.

How often do anoles shed?
Do not peel off the skin if it is not ready to come off. This can be dangerous and painful. Most lizard species will shed every 4-6 weeks.
By Judith Willson

The green anole lizard (Anolis carolinensis), native to the southeastern part of the United States, is also known as the American chameleon because of its ability to change color. As they are active, interesting animals that consume pests such as cockroaches, gardeners may wish to attract more of these little lizards to their gardens. Creating a lizard-friendly garden is also worth doing for conservation purposes. Although green anoles are in no imminent danger of extinction, they are under threat from habitat destruction and competition with other species of lizard, notably in Florida.

Garden organically. Green anoles need a plentiful supply of food, which pesticides kill off. It is also possible for a lizard to swallow a poisoned insect, which could be fatal. Clever organic gardening establishes a natural balance in your garden, whereby natural predators, including green anoles, keep pests under control.

Plant dense vegetation, including trees, shrubs, climbing plants such as vines, ferns and bromeliads. Green anoles are arboreal lizards that favor a jungle-like habitat. They also need the opportunity to cool off in the shade that thick vegetation provides. Choose native plants wherever possible to provide the most natural environment best suited to native wildlife.

Provide shallow pools underneath the tree and shrub canopy. Sink shallow ceramic dishes or plastic tubs or trays into the ground and fill with water. In hot, dry weather, green anoles need to drink. Alternatively, install a birdbath close enough to the vegetation that anoles can crawl over.

Position a few short logs in a sheltered location. As the logs rot, they provide a place for anoles to lay their eggs. Also, let fallen leaves remain under the canopy when they fall.

VIDEO 2.
2.  Use some Footage of The Forecourt Garden-Theatres on the Bay. Show the Merlion too.

OTHER PEOPLE'S VIDEO OF A GREEN ANOLE LIZARD PUFFLING

The Oriental Garden Lizard, Eastern Garden Lizard or Changeable
Lizard (Calotes versicolor) is brownish to greenish yellow.
Some images are shown below.  It is seen in The Esplanade and Yio Chu Kang Crescent on tree trunks in small numbers. However, during the past 3 years of morning exercise walks, I have not seen one Green Crested Lizard. This shows that the Changeable Lizard is more aggressive and successful in surviving. 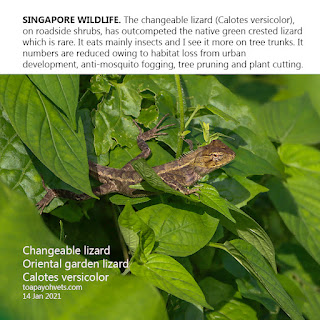 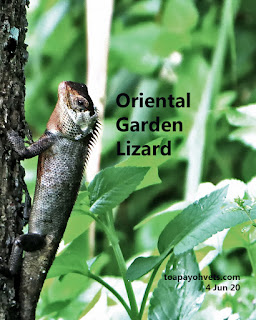 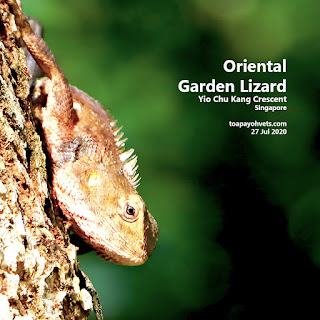 VIDEOS OF OTHER PEOPLE

6.  A very short video clip of the juvenile Oriental Garden Lizard seen crossing my path at The Esplanade. No more neck puffing now.

Here are eight animal immigrants that came to Singapore with the same level of determination and hunger for success.
1. Changeable lizard
Source
The animal: The Changeable lizard or the Oriental Garden Lizard (Calotes versicolor) is a notorious invasive species that can change its color to dark brown when threatened. Erroneously known to Singaporeans as the ‘chameleon.’
Where it’s from: Thailand and Northern Malaysia.
How it got here: Believed to be an accidental immigrant arriving with vehicles and ships from up North. Said to be spotted in the 1980s in Singapore.
Why it’s a survivor: The Changeable lizard is more territorial, more aggressive than its native counterpart, the tree-hugging Green Crested Lizard (Bronchocela cristatella), which can also turn dark brown under duress.
Lessons natives can learn: If you’ve the same skills as your competitors, strive to be a little more aggressive and adaptable for that extra edge.
Because being a pacifist in today’s working environment simply isn’t going to cut it. 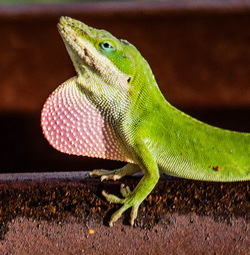 The Green Anole (Anolis carolinensis) in Hawaii by Jeanne Lindgren
Dewlaps are the special throat pouch that is puffed up when attracting a mate or defending territory. In the green anole, this has a pinkish hue; the dewlap of the brown anole is a vivid orange-red.

Both can change colour due to the presence of chromophores or pigment bearing cells in the skin. A green anole, owing to factors as temperature, humidity or stress, can change to look more olive or dark brown. Brown anoles cannot change to green but to various hues of brown.


Green anole lizards are about 4 – 8 inches long and have a long nose. Of their total length, their tails comprise a major portion of the same. The male anole lizards are bigger than the female lizards when they are fully mature. Their snouts are longer as well. The lizards are green all over, except that the males have a flap under their throat which turns into a fiery red color during territorial displays or when courting a female for mating. Another factor that distinguishes the males from the females is that the male lizards also have two sets of bigger scales at the point where their tail starts. These lizards are known to shed off their tails and grow a new one in its place. They also shed off their skin during the shedding season and then proceed to eat it.


Head bob up and down 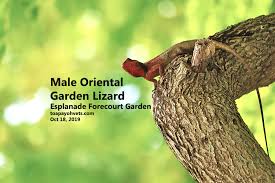 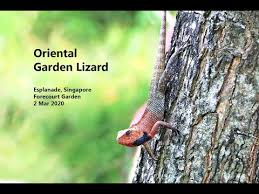 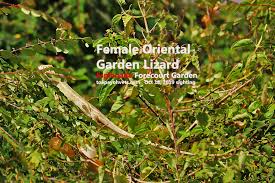 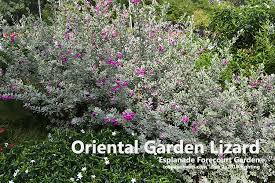 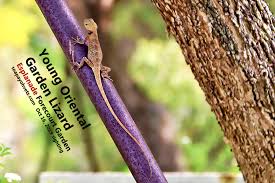 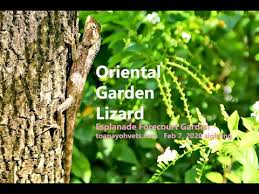 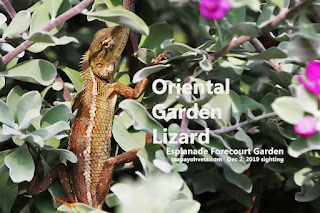 The lizard below was seen in Yio Chu Kang Crescent roadside undergrowth on 16 Jan 2021.
The Oriental Garden Lizard, Eastern Garden Lizard or Changeable Lizard (Calotes versicolor) is an agamid lizard found widely distributed in Asia. It has also been introduced in many other parts of the world. Adpats well to humans, undergrowth and highly urban areas.
SINGAPORE WILDLIFE. The changeable lizard (Calotes versicolor), on roadside shrubs, has outcompeted the native green crested lizard which is rare. It eats mainly insects and I see it more on tree trunks. It numbers are reduced owing to habitat loss from urban development, anti-mosquito fogging, tree pruning and plant cutting 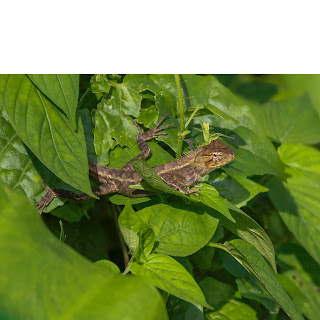 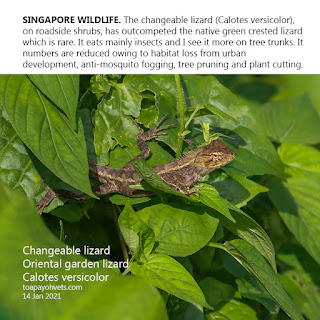 Posted by toapayohvets at 6:51 PM