A 2006 case. I was saddened that the father took the dwarf hamster for treatment at such a late stage. The teen-aged boy loved this hamster very much, but he was dependent on his father to get the hamster treated.

In that period of time, very few vets operate to remove large tumours on dwarf hamsters. The anaesthetic was high risk. For this case, the hamster survived and we were all joyous. 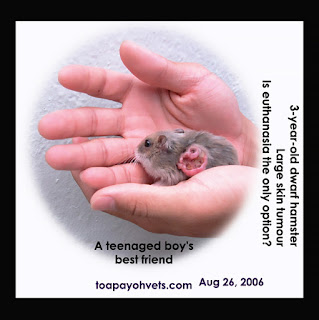 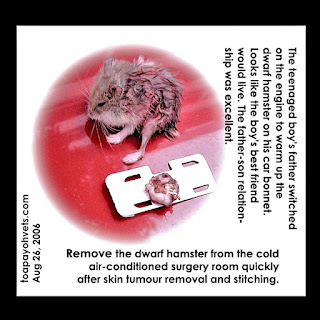 My original webpage of this case is at:

The dwarf hamster stopped breathing as the last of 3 stitches closed up her 3-cm long skin wound.

She had gas anaesthesia in a transparent container packed with cotton wool. As soon as she closed her eyelids, she was taken out, placed on the stainless steel operating table. The 10-cent coin size of skin lump with holes and raw edges due to her continual licking was pulled up and cut off. She did move a bit and was put back into the anaesthetic chamber for a 10 seconds. She sniffed some anaesthetic gas, blood spurted all over the chamber's cotton wool. I quickly got her out. Placed her on the white tissue paper and swabbed away the free flowing blood that had flooded onto her left side of her body. She stopped breathing.

Motionless. Had she died? Nurse Mary continued to wipe off the blood from her wound with a piece of tissue paper and was going to the tap to flush away the copious amount of blood.

"No flushing with tap water," I advised Nurse Mary, a new team member.

She would have flushed off the blood from the skin with plenty of water when she cared for dogs.

"The hamster would just die from shock and the coldness as she has a very small body surface area compared to a dog. The tap water would be too cold for her and she might die from hypothermia or lowering of body temperature.

"Just slowly wipe off the blood with the tissue paper as gently as you can.

As Nurse Mary wiped the blood in the air-conditioned operation room, I noticed that the hamster stopped breathing.

She was 3 years old and could be considered an old woman in her eighties, by human standards.

The father had brought the thin pet in for euthanasia on this Sunday afternoon.

His teenaged son loved the hamster but the lump had grown bigger and had ulcerated since 4 weeks ago when I saw it. I had advised that the hamster be fattened up and come back in 2 weeks for the surgery. But now, it was four weeks.

"If you want to take the risk of the hamster dying from general anaesthetic, I could remove the lump," I said.

"I will take the risk," the father replied. "It is better than euthanasia."

His teenaged son did not say anything. He was a quiet boy but he must have felt happier.

The skin tumour was cut off from the body. The skin wound was a huge gap as the cut skin slipped off, exposing the backbone of the hamster. The two ends of the skin were stitched up with 3 sutures.

But now, the hamster stopped struggling against the pain and the cleaning. Was this aged hamster dead?

"Take it out of the operation room," I said. "Out of the air conditioned operating room. Outside the Surgery... to the warm air.

"The best place for her would be the car bonnet."

It was an extremely hot Sunday afternoon.

"I switch on the engine," the father of the teenaged boy opened his right front door when he saw Nurse Mary and I rushing out of the Surgery.

Nurse Mary placed the hamster on his warm car bonnet. He had parked his car less than 30 minutes ago to request for euthanasia and was waiting outside with his son.

Nurse Mary patiently soaked the blood from the hamster's right side.

The hamster was still life-less. After a long time, there was a slight movement of the hind legs as the hamster felt the warmth of the bonnet against her belly.

The hamster got up and slided down the bonnet to the right side. The teenaged boy extended his hands to block her from falling off the car. It was a good sign that she would survive.

There was hope of renewing the friendship between a teenager and a hamster. A friend for over 3 years was not letting him down by passing away. She put up her front paws above her forehead , rubbed her eyes and then combed her hair on top of her head. As if she wanted to be presentable for all of us. She was conscious.

The anaesthetic gas and shock had disappeared from her body. How long would he be living? We had to wait and see.

The teenaged boy put the hamster into her plastic container. "Feed her with liquid food frequently over the weekend," I said. "If the hamster could survive the next 3 days, she should be back to normal."

Today was one of those extremely hot and humid August 2006 Sundays. Singaporeans cursed and swore at this inconvenience, but for the hamster the heat saved her life. Much better than an electrical warming pad. The father of the teenaged boy brought her in for euthanasia. But he had an option of Surgery. He gambled and won. The hamster left the Surgery with a chance of renewing the friendship with the boy who loved her very much.

Posted by toapayohvets at 2:59 AM