2350. Unbelievable story. How to get the blue-fronted Amazon home?

"I don't know whether you will consider me loony," the camera salesman said to me. "After I prayed to Buddha, a big black bee appeared and landed on the crown of my blue-fronted Amazon perched in a tree opposite my 5th floor apartment. The buzzing bee gave my bird such a fright that he flapped his wings and landed onto the ground!"

I was at the camera shop to buy batteries for my Canon camera before going on a trip to Europe this Thursday.

Andrew showed me his wife's iPhone 6's image of the bird perched on the tree last Thursday, Oct 29, 2015.  This was the evidence. Now, the unbelievable story of keeping one's faith. 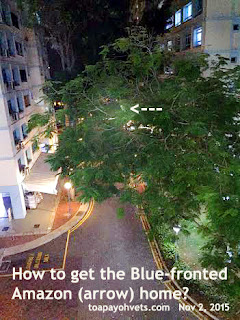 "I have encountered more unbelievable spiritual stories than yours and so do not consider you mentally ill," I said. "Such stories have no scientific basis but are based on faith. How did the blue-fronted Amazon escape from your apartment?"

"For the past 10 years, I have been bathing him every morning in the corridor, outside my apartment. It is a corner unit and so I have this space to spray water to bathe him as he perched on the horizontal part of the staircase railing. 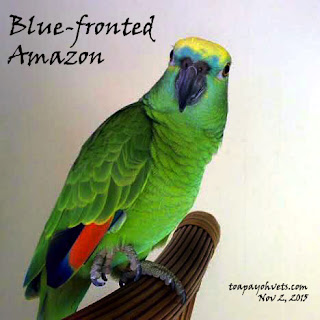 "It is not possible to differentiate the gender of the blue-fronted amazon from his plumage colours or size," Andrew said. 'You need to do DNA analysis."

"Why would he be flying off as his wings are clipped short?" I asked. Andrew had clipped his wings 10 years ago. Birds cannot fly if their wings have been clipped.

"Bathing him was a routine and he had never attempted to fly away in the past 10 years, "Andrew replied. "Except on that day. Some noise had panicked him. He flapped his wings, shot out from the corridor and glided from my 5th floor across to the tree opposite."

Never take routines for granted. Be on the ball.

"Why didn't you tether his toes with a string while you spray water to bathe him?" I asked.

"Birds don't like that. My African Grey parrot was very unhappy with that and so I did not do that with this bird."

"I rushed downstairs and brought my bird cage with food downstairs and called his name. He would not come down! I had to go to work and at night, I got my cage down again. As the Malay family was having a wedding dinner on the void deck, a catering truck came. The engine noise frightened the bird further. The driver asked me whether I would like to climb to the roof of his truck to get the bird down. But the bird was much higher level! On the 5th floor level! So his suggestion was of no use. "

"Did you contact the pest-control man?" I asked. These are private contractors engaged to clear bees, stray cats, rats, termites, bed bugs, ticks in houses and any other pests.

"My second son furiously researched the internet and a bird catcher quoted $1,000 to rescue the bird," he replied. "But with no guarantee. I still have to pay him $1,000: My elder son told me not to be hopeful of regaining my pet."

Wow, these two young adult sons are very helpful and concerned about their father's misfortunes, unlike many young Singaporeans who are self-centered.

"How far away was this parrot from your apartment?" Andrew had said that his living room faces the tree where the bird was perched.

He estimated about 50 feet away as he could see the black bee landing on the bird's crown clearly. An adult blue-fronted amazon is around 38 cm or 15 inches long. I have doubts about his estimation of such a short distance. But I was not on the man on the spot.

So, Andrew went to work from 2 pm to 11 pm and his wife sent him the iPhone image of the parrot still perched on the tree. Stationary. Frightened. Breathing the poisonous particles of the haze.

"I cabled 5 long bamboo poles lengthwise and pointed them towards the bird," he said.
"That is a good idea. But are you sure you can reach the bird so that he can perch onto it and come home?",

Bamboo poles are used by people to hang out clothes to dry, saving on the waste of money and resources in buying in a dryer. A bamboo pole is around 7 feet long and 5 of them still could not reach the bird.

"The problem was that the 5th furthest pole started to sag downwards, being pulled by gravity!"

So, there was no solution. The bird was still in the tree overnight. There was haze. A drizzle on Friday morning. The bird must be wet and shivering.

"Luckily, there was no hawk or eagle to pounce on him." I said.
"If he had flown to the ground while I was not around, a stray cat may kill him too."

Life is full of dangers for a strayed pet bird. No wonder he stayed still in the tree.

On Friday morning, Andrew bathed and prayed to his 3 Buddhas for help. One was a bronze, the other was gilded gold and the third one was translucent.

"The sunshine briefly shone through the hazy grey clouds," Andrew looked out of his window after the prayer. "I saw a big black bee flying towards the parrot and landed on top of his head. My bird gave a shriek and flapped his wings landing on the ground. I sprinted downstairs and got him to safety before the stray cats kill him!"

I remembered this episode well as I was outdoors at the clinic on this Friday morning. So many days of poor visibility of the sun and buildings from the haze caused by the forest fires in Indonesia. So I could appreciate the sight of bright sunshine as most of the time, the morning sun was not visible or bright reddish orange.

"This happened only 3 days ago. Do you consider me loony?"

"No," I said. "I have encountered personally more divine-related stories from one of my clients.

"What happened? What happened?" Andrew asked. Business was quiet nowadays for most retail shops with no customers on this Friday afternoon. Smart phones with cameras have had killed the compact camera business, Andrew said. So, the sales people in many retail shops are fiddling their thumbs, surfing the net or texting during office hours.

"One client's mother had lung cancer. The doctor certified that the disease was incurable. The mother got her insurance money. The mother prayed with faith. The family members were active in the church. One member adopted a stray dog and that was how I met them and got their story. The family prayed for her recovery. "She did not have lung cancer," the daughter-in-law said to me. "The doctor consider this a miracle healing. I still have the doctor's letter of no chance of cure to the insurance company!"

I narrated my unbelievable story to Andrew to let him know that some events are just unscientific and unbelievable.

P.S
In Singapore, the government builds HDB (Housing and Development Board) apartments cookie-cutter style. There will be a car park between apartment blocks. Trees will be planted. Bamboo poles are used to dry clothes instead of dryer machines. In the lower floors, the branches of mature trees can grow quite close to the apartments as shown in the images below. 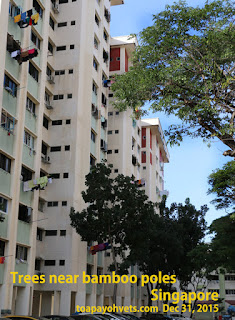 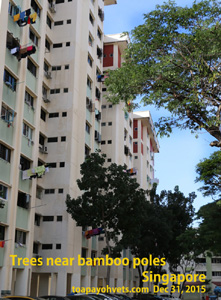 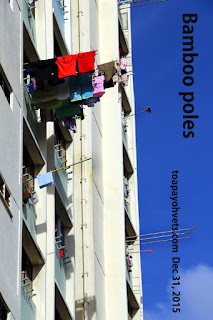 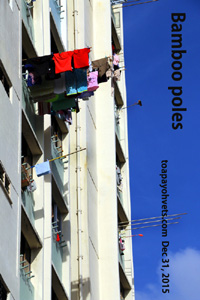 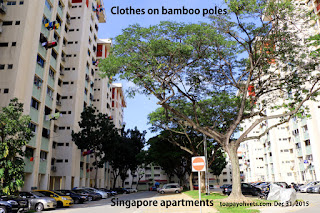 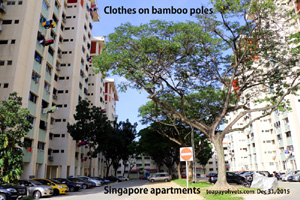 Posted by toapayohvets at 2:39 PM