3354. Veterinary Files from Myanmar. A pet squirrel in Yangon vomited for 3 days

The following text is a guideline. 3 parts.

2. VIDEO 2.  Wildlife in Singapore.  Very few squirrels are seen in Singapore nowadays due to loss of habitat as the country clears forests for housing development. Singaporean travellers love to take photos of squirrels during their travels overseas (images of squirrels in London, USA, Turkey)
3. VIDEO 3.  Dr Sing's rare encounters with 2 wild squirrels in Singapore, during his morning walks.
Unexpected encounter. The squirrel dashed off with the fallen mango up the mango tree.
On another occasion, one was videoed eating rambutans in a tree.

1.  Please review, edit, re-write and create a video about the diagnosis and treatment of vomiting in a pet squirrel.  SUBTITLES.

(Show images of Myanmar to introduce the Myanmar setting. See images (ABOUT MYANMAR) below. Then add in the footage of the pet squirrel on the owner's shoulder.

Narrate the following OR your own story according to your time frames:

Myanmar is a big country with over 50 million people. It has vast areas of agricultural land with rice, beans, fruits like oranges and mangoes grown, .(ABOUT MYANMAR IMAGES)

In Yangon, a gentleman (video footage) bought a 4-month-old squirrel as a pet last month. In July 5, 2019,  this squirrel had vomited for 3 days. This was not normal.  The owner brought it to Royal Asia Veterinary Surgery in Yangon to consult veterinarian Dr Thein Tun Aung (insert his images, see below)..

"What caused him to vomit?" the tattooed gentleman asked. 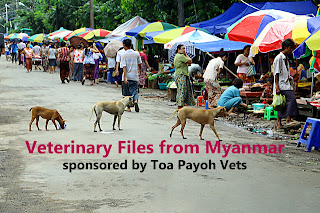 (Title)
A PET SQUIRREL IN MYANMAR VOMITED FOR 3 DAYS 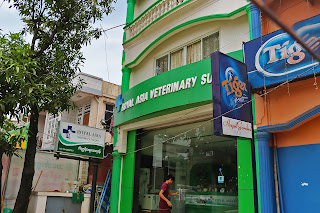 Royal Asia Veterinary Surgery in Myanmar was established more than 10 years ago. It is a busy practice with a heavy caseload. Various veterinary surgeons like Dr May Than Oo (insert image below) had practised there.

DR THEIN TUN AUNG's patients are mainly dogs and cats. This pet squirrel was his 2nd squirrel patient.  The Sarus crane with an injured foot was another exotic pet.

(BACK TO THE SQUIRREL)

The squirrel was still active. Dr Aung took his rectal temperature. It was 99 degrees F. The normal body temperature for a gray squirrel is between 99° and 101° Fahrenheit (F). He had no fever. What was the cause of her persistent vomiting?.

Dr Aung had X-rays taken.
A foreign body like small stones could be inside the stomach or intestines. 2 X-rays were taken..No radio-dense foreign bodies were seen. There could still be radio-lucent foreign bodies but X-rays would not reveal them..

The X-rays showed a cloudy abdomen masking the liver, kidneys and most intestines.
(show and narrare the X-rays of this patient compared to a normal X-ray, see below). This was not good news.

What type of cloudy peritoneal fluid was present inside the abdomen? Dr Aung did a paracentesis (define paracentesis, see below).
.

CAUSES OF VOMITING (see below)

Dr Aung injected subcutaneous fluid and antibiotics. The owner would keep the squirrel warm inside a box and continue with oral antibiotics and electrolyes to prevent dehydration for the next 3 days. A review after 3 days was advised..

TREATMENT AND ADVICES AT HOME (see below).

CONCLUSION
The squirrel had sepsis as the peritoneal fluid was not bloody and cloudy. It should be clear and transparent in normal squirrels. (Insert images of some normal squirrels). He passed away 2 days later.One possible cause of sepsis could be the rupture of the intestines due to sharp twigs penetrating through the intestinal wall.

The owner did not want the post-mortem to check the cause of death. He buried the squirrel. 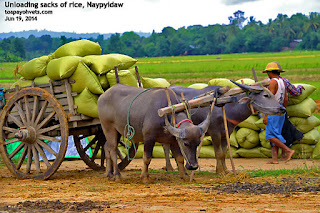 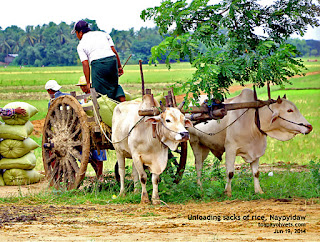 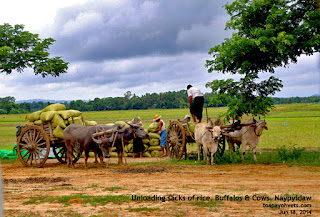 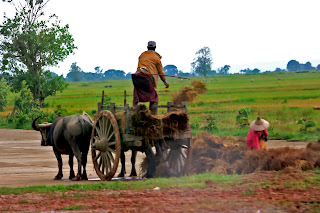 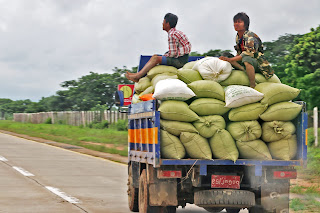 The country has developed very fast in the last 3 years, with new investments in industries, hotels and other areas. The airport in Yangon had new terminals and facilities nowadays. The young generation has benefitted from new investments in education and school. 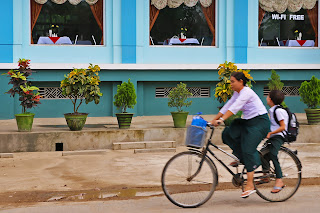 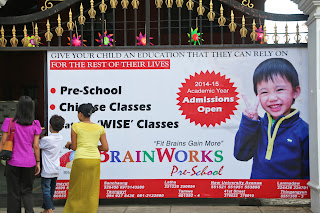 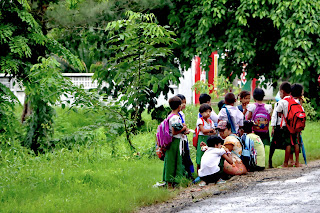 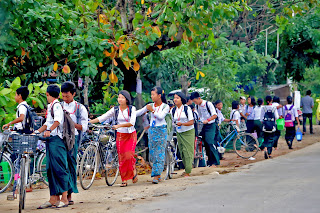 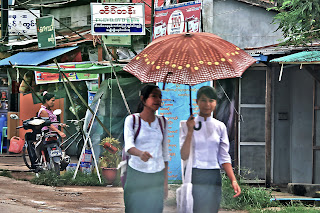 WHAT ARE THE CAUSES OF VOMITING?
1. Foreign bodies inside the stomach or intestines. X-rays were performed.
2. Infections from traumatic injuries inside the abdomen, liver and kidney disorders
3. Poison or toxic chemicals ingested. It was not possible to do toxicology to determine the poison or chemicals..
4. Anti-flea powder or chemicals applied on the squirrel's body by the owner,. The squirrel groomed itself and was poisoned.  .

1. RADIOGRAPHY
Two X-rays were taken. The abdomen was not swollen. It showed radio-dense fluid indicating peritonitis but no radio-dense foreign bodies. There were gas inside the stomach and intestines. (Narrate slowly, showing the cloudy abdomen...pointer?) 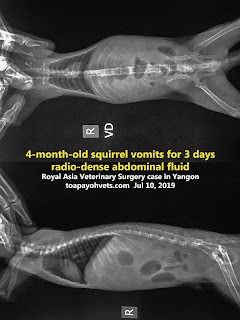 The above X-ray was compared to a normal X-ray of a young squirrel as follows:

2. PARACENTESIS.
Under light gaseous anaesthesia, a needle was inserted into the abdomen to draw out peritoneal fluid for examination and bacterial culture and antibiotic sensistivity test. 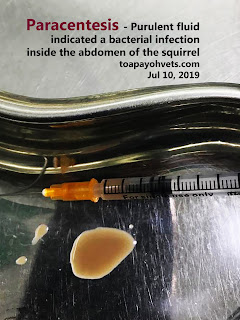 The normal fluid is clear but this squirrel had reddish-brownish fluid suggestive of an infectious peritonitis. The cause was likely due to a penetrating traumatic wound into the abdomen.

1. Prevention of further dehydration. Dr Aung pinched the skin between the shoulder blades. The skin stayed pinched and fell slowly showing that the squirrel was severely dehydrated.Oral and subcutaneous electrolytes were given.

2. The owner would keep the squirrel warm inside a box with heated pads.

3. He would feed antibiotics.

4. He would feed an oral diet by hand daily if there was no more vomiting after rehydration. . Squirrels are omnivores. They like to eat plants (fungi, seeds, nuts and fruits) and meat (eggs, small insects, caterpillars and small animals)

The owner was informed that the prognosis was poor. The squirrel had an infectious peritonitis. The peritoneal fluid was sucked out slowly.

SITUATION OF EXOTIC PETS IN SINGAPORE

IN SINGAPORE, most small animal vets will never see a squirrel case as it is not permitted as pets.

The plantain squirrels appears to be the most common of the tree squirrels spotted in Singapore. The population of all types of squirrels in Singapore has declined owing to habitat loss.


A plantain squirrel has a black and white stripe below the orange-coloured body.

Show the stripe in image 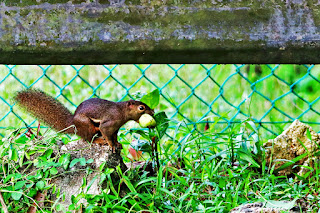 Dr Sing of Toa Payoh Vets has a rare sighting of this plantain squirrel one early morning in July 2019 while doing his morning exercise walk. The squirrel was perched on the fence. He decided fast to grab the fallen mango on the road. He sprinted the tree to eat it for breakfast.(Narrate over the 3 images below). 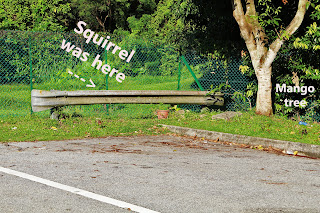 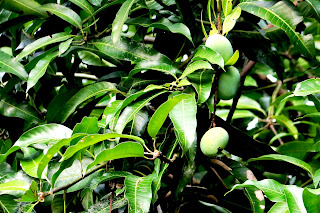 On another occasion, Dr Sing saw a movement amongst the leaves in a tree. He videoed a squirrel busy eating rambutans. Do not keep squirrels as pets as they are decreasing in numbers in many cities due to the loss of habitat. .
. 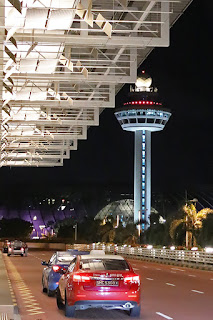 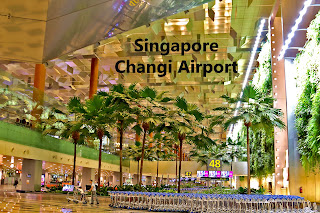 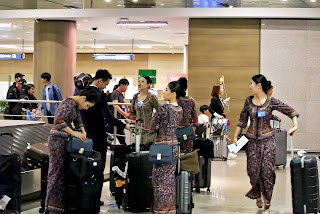 Most Singaporeans love taking photographs of the squirrel seen when they travel as they rarely see them in urbanised Singapore. 3 such squirrels in London, USA and Turkey are shared with viewers.


Photos taken by mobile phones (London, USA) are not as sharp as the one taken by a DSLR camera zoom lens (Singapore, Turkey). 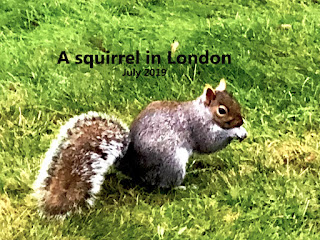 CREDITS
Your name and the clinic's people.

Posted by toapayohvets at 6:57 PM