What evidence is there that the dog has pyometra? "This dog had no bleeding of heat during the past 3 years," the owner asserted and so, would not produce bleeding from the uterus.

On examining my records, the dog came in Jan 2015 for vaccination. I detected false pregnancy with milk seen in the mammary glands and swelling of the nipples. I advised spaying to prevent pyometra.

Today, July 4, 2016, the owner accepted the evidence of swollen uterus on X-rays and blood infection from blood test. His helper had shown blackish red vaginal discharge seen 2 days ago, snapped in her smartphone. Brownish-yellow discharge dribbled from the swollen private parts.

The evidence pointed to pyometra.
Surgery together confirmed it (Video).

Nowadays, Singaporeans are well informed by surfing the net. So, it is best to produce evidence to come to a diagnosis of pyometra. 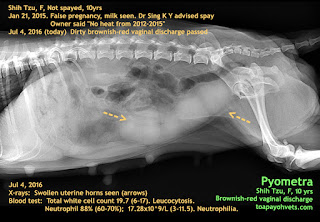 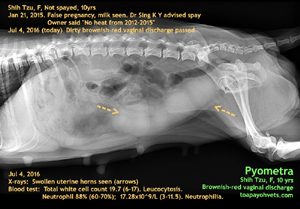 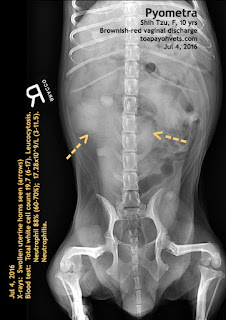 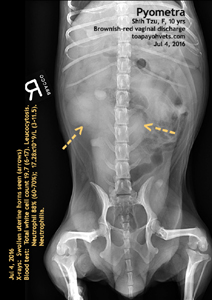 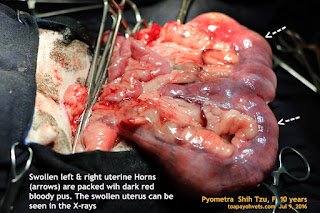 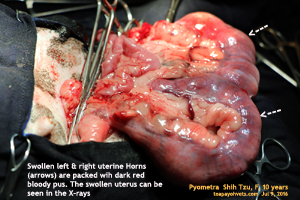 Uterus is swollen as seen in the X-rays. They are being removed by Dr Daniel. 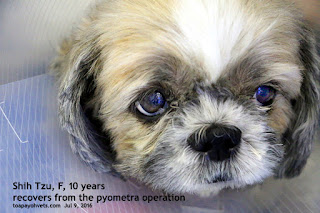 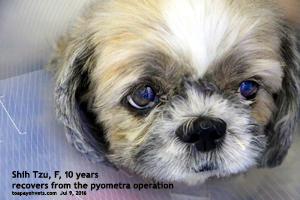 The 10-year-old Shih Tzu has recovered from the operation and is well as at an update 2 weeks later
Posted by toapayohvets at 7:55 PM