2984. INTERN RI - A repeat X-ray shows lung tumours have compressed the windpipe of the coughing Schnauzer


This 15-year-old male Miniature Schnauzer was adopted as a 3-year-old and was much loved as evident by the couple seeking a second opinion at Toa Payoh Vets and following up with us to resolve the daily coughing.

"He did cough up blood 2 months ago. A dry hacking cough. I thought it was kennel cough and brought to Vet 1.  Vet 1 did X-rays and said that there could be lung tumours. He proposed $4,500 to do surgery."

So, the couple came to Toa Payoh Vets for a second opinion as they were not convinced of Vet 1's diagnosis of possible lung tumours.

"The dog must have something inside his throat," the husband said yesterday as the dog came in collapsed and coughing. He was warded in a veterinary surgery with 24-hour nursing care overnight and brought back to Toa Payoh Vets today by me.

My vet proposed a broncho-scope to see inside the windpipe and a referred vet quoted $1,600 for the procedure.

"Are there lung tumours on not?" I asked as Vet 1 seemed to have said that lung tumours were present but the owner was not sure. I asked for the veterinary report from Vet 1 but the wife showed me the X ray images on her mobile phone. 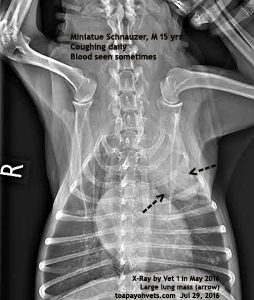 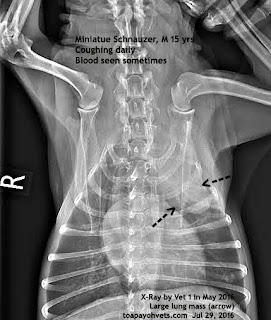 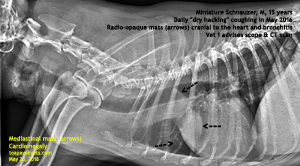 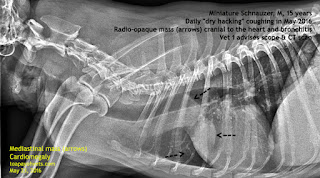 X RAYS BY VET 1 AT THE ONSET OF COUGHING
As the white opaque mass on the left upper quadrant of the chest could not be determined to be lung cancer or note, Vet 1 proposed scan which would cost around $800 and referred to Vet 2 for the scanning. Vet 2 said scoping the lungs and MRI scan would cost $4,000 - $5,000.

So the couple googled "vets" and chose Toa Payoh Vets for a second opinion.

In late July, the dog's condition worsened. He coughed badly at night on July 25, 2016 and came to Toa Payoh Vets. My vet advised scope to check on "something in the throat" as suggested by the owner.


"It may be lung cancer. It is better and cheaper to get another X-ray done since the one done by Vet 1 was 2 months ago," I advised. The couple agreed and I got the dog X-rays done. Scoping would cost $1,600 from another vet.

"More coughing and lack of oxygen in the blood causing cyanotic tongue yesterday indicate that the lung tumours have badly affected this dog compared to 2 months ago,"  I could see the couples' smartphone video shown to me. The dog was not coughing, ate like a horse and was normal lifting is leg to pee in this video taken by the wife in May 2016.  So, that was the reason the couple did not think that the dog had lung tumours.

The repeat X-rays shows the progress of the lung tumours. "It is likely lung cancer since the dog got much worse in the last 2 weeks, could not breathe well due to lack of oxygen in the red blood cells causing cyanotic tongue and nearly died from collapse yesterday. There is the windpipe being pushed upwards by the tumour in front of the heart as seen on the lateral X-ray." 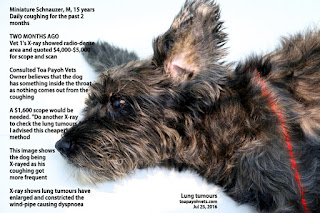 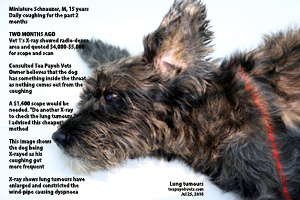 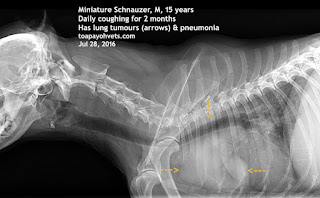 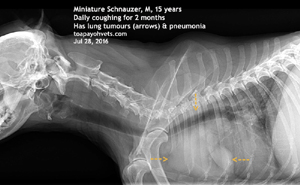 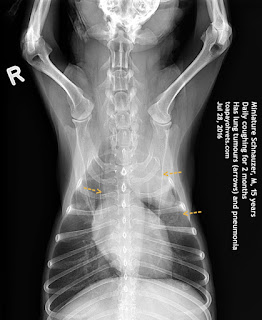 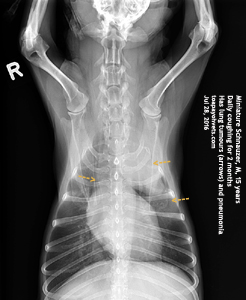 "Is there a cure?" the couple asked.
"No permanent cure even with chemotherapy."
"With chemo, the dog will have a poor quality of life," the wife said. "How long will the dog live?"
"I can't say. Maybe 2 weeks. He had fits and probably metastasis to the brain causing minor strokes yesterday. I had given anti-fit IV for the past 2 nights and the fits were controlled.  However the dog could not stand up and be normal."

July 27, 2016. Dog had seizures at night. Sent to emergency clinic. Decided that it was humane not to let him suffer more by undergoing ozone therapy as suggested by the vet. Euthanasia was the last resort and kindest to the beloved companion of 12 years.  He lived to a ripe old age of 15 years without skin and ear diseases and urinary stones which affect many Schnauzers in Singapore.


Veterinary investigations like MRI scans can amount to over $5,000 and this is expensive for most owners.


12 years ago, found on void deck. Abandoned likely. Very thin. Very hungry and shaggy.
Nobody responded to advert on void deck to claim the dog
Sent to grooming
Still no response to advert.
Adopted.
No illness for the past 12 years till coughing in July 2016 and sent to Vet 1.


The owner brought the dog back to decide what to do. The dog had seizures again.  He was sent to the emergency clinic for hospitalisation.
Posted by toapayohvets at 7:15 PM