2983. A British Bulldog cannot open his right side of his mouth

A "miniature" gentle British Bulldog. The young couple came to Toa Payoh Vets for a second opinion. Vet 1 had X-rayed the mouth and declared nothing wrong with it. Yet the dog could not open his mouth fully.

"The problem started after he chewed a pig's ear," the wife showed me a video as evidence. "Vigorous chewing on the right side." This was great evidence.

"Soon the right eye became red," the wife continued. "The right cherry eye popped out of the eyelid later but went back into the eyelid again! So we rushed him to Vet 1. Vet 1 did suggest a genetic problem with the jaw. "


"Yes, there is a dog breed which is prone to TMJ disorder," I said.

Vet 1 proposed an MRI scan which would cost $1,800 but is the gold standard for TMJ disorders. The owners were not keen on the MRI. The dog was prescribed eye drops and meloxicam 10 ml bottle.

The dog could open his mouth around 5 degrees and still could eat and swallow despite this difficulty. So there was no need for a feeding tube nor massage recommended.


I requested Vet 1 to email me the X-ray as the owner was reluctant to get further X-rays of the TMJ (temporo-mandibular joint". 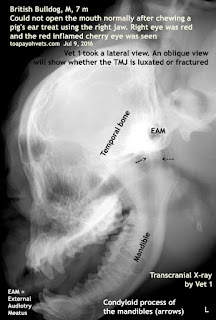 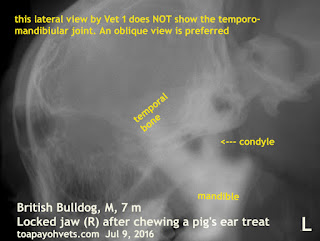 An oblique X-ray would be more useful than the lateral one done by Vet 1.  A dorsal-ventral view of the head would show whether the condyles were luxated or fractured but this was not done. 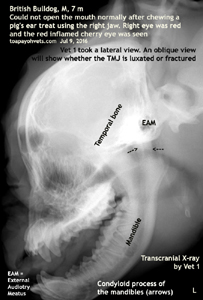 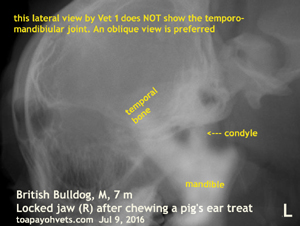 "At first he could only drool after chewing the pig's ear," the husband said. "That was why we quickly brought him to Vet 1. But Vet 1 said there was nothing wrong with the right side of the mouth."

.
I got a blood test to check for any toxin affecting the platelets or blood cells since this was not performed by Vet 1.


"It is likely that the pig's ear was preserved with chemicals which seeped into the right side of the mouth and facial muscles," I hypothesized. "The red eye became inflamed and painful. Then the right TMJ jaw joint was 'locked' by spasm of the muscles and nerve toxicity.

Or the vigorous chewing could have dislocated the TMJ partly causing intense pain, hence locking the jaw. The couple was more in favour of the chemical cause.

The dog went home with an anti-inflammatory injection and would be reviewed 2 weeks later.

Sometimes, it is hard to determine the exact cause. As for the MRI, the cost is very high and few owners want to do it as Vet 1 probably could not communicate the value of doing the MRI.


FOLLOW UP ON JUL 27, 2016
The dog was seen yesterday and was given a pred injection. The course of 10 ml of meloxicam was completed.  The blood test showed liver disorder or inflammation with liver enzymes twice the normal level.  The total white cell count was normal as were the neutrophils and lymphocytes. Why was the liver enzymes raised?  Could the liver damage be due to the toxic chemicals in the pig ear affecting the dog?  The owner would send me a video of the dog chomping vogorously on the pig ear for my intern to produce a video.

"The dog could open his mouth more and is more active," the wife told the husband as I enquired over the phone.

Good view of TMJ from another dog with no locked jaw.  Mouth is closed. 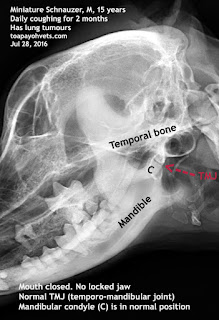 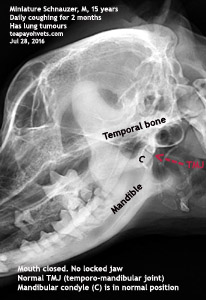 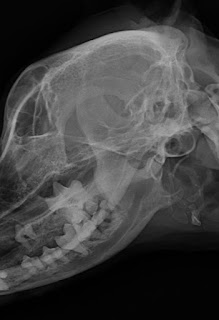 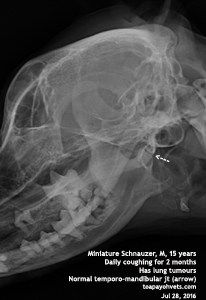 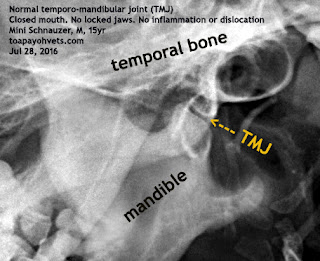 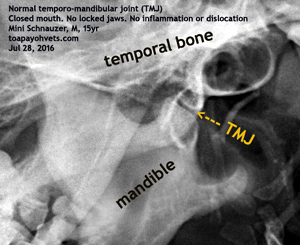 Posted by toapayohvets at 6:57 PM