2981. A 15-year-old Jack Russell vomits and has bloody diarrhoea

CASE 1
Actie outdoors. Goes for walks. Had ticks. 2 days ago
vomitted many times and passed bloody diarrhoea. Lethargic. Cyanotic mucous membranes. . Rectal temperature 37.6 is below noraml.  Had ticks - a big engorged one and smaller one. 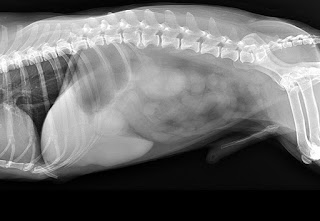 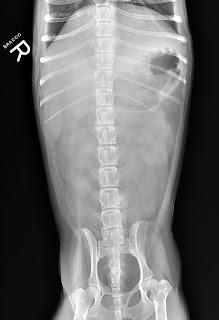 Recently, there are reports of leptospirosis (bacterial infection) in a pet care place's swimming pool and some cases in people.  Leptospirosis is a notifiable disease.

1/18 cases was confirmed leptospira according to a Straits Times report on July 21, 2016. Dogs were either not vaccinated or had no updated vaccination.

This dog had no exposure to rats but had walked in parks. IV drips and antibiotics were given but the dog had fits due to kidney failure. The beloved dog was euthanased as the prognosis for full recovery was very poor. 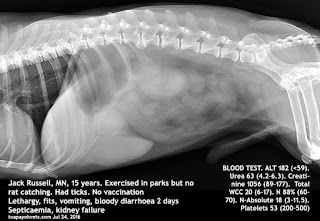 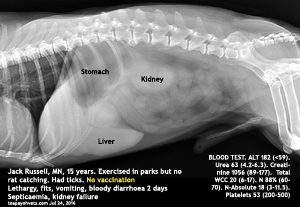 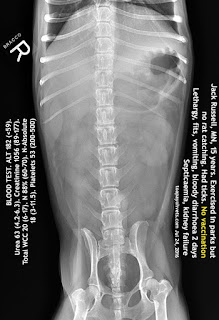 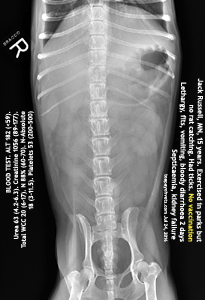 "Does he catch rats?" I asked as there were some cases of leptosporosis in dogs and people reported.
I treated with antibiotics, anti-spasmodic and IVdrips for 2 days. The dog showed fits which was controlled by diazepam IV 24 hourly for last 2 days. But he was unable to stand up. The owner decided on euthanasia.

Vomiting and diarrhoea are very common conditions in dogs. This dog was not boarded but had been to parks. He would have picked up some bacterial infections causing septicaemia. Many owners would not vaccinate older dogs and some do suffer from diseases causing serious illness.

Posted by toapayohvets at 12:52 AM