2966. Follow up: what happened to the Dachshund puppy with the crooked tail and swollen umbilicus?

4 days have passed. What happened to the puppy with the crooked tail and swollen umbilical cord?


This morning, I visited the C-section 634rd-day pregnant Dachshund. She's OK but was not permitted to nurse her own new born puppies. The poodle was the surrogate for the 3 puppies. The 4th with the crooked tail and swollen umbilicus had passed away the 2nd day although the umbilicus had dried up.

"I had tied up the intestine which was inside the swollen umbilical cord," the breeder said. "So the intestine was deprived of the blood supply, killing the puppy. I had a few of such cases."

Each breeder or vet has his or her own theories about medical conditions and so I did not say that this puppy had been severely stressed as the amniotic sac was filled with yellow meconium unlike the normal 3 siblings. In human medicine, ultrasound scans showing meconium in the baby will lead to an emergency Caesarean section to save the baby. But costs prohibit the breeder from spending on such ultrasounds. 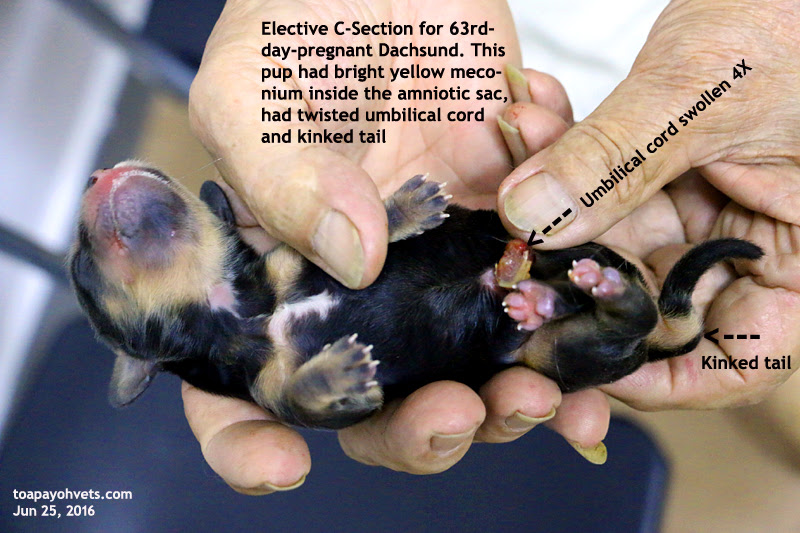 The umbilical cord was twisted and so it swelled 4X. But I know the experienced breeder would not accept my theory and so I did not expound my theory.  "Maybe, next time, I should check the swollen umbilical cord for any intestines inside and push them inwards before you tie the cord," I said.

"I should assist you during C-sections," he said as I usually asked him to be outside the operating room unlike one lady vet who had 100% no-death in puppies in C-sections with him and so she was an excellent vet.  Unfortunately she had retired from doing C-sections for him and he had been to various vets throughout the past years. He advocated an assistant to elevate the lower body of the dam so that C-sections can be completed faster. Or the assistant holding part of the uterine horn while I take out the puppies faster.

The latter suggestion was preposterous as the gravid uterine horn is not that long unlike that of the cow's. There is just no space for another assistant to hold part of the uterus while the vet milk out the puppy.

Many sensitive younger vets may not be happy with his presence or suggestions of assistance or his criticism of puppy death being due to delay in pulling out the puppy and so the puppy had an overdose of the isoflurane and therefore die the next day. I don't permit outsiders into the op room during C-sections to keep the room as sterile as possible.

In this 63rd-day pregnant, the breeder had outsourced the 3 puppies to the poodle and is pleased with his decision as the puppies are thriving. He believed that the other Dachshund had toxic milk killing all the 3 puppies I delivered alive on C-section and so was not taking chances with this Dachshund. This Dachshund had snow-white milk whereas the other had no milk and the next day, produced thick yellowish milk deemed toxic to the 3 puppies.

Breeders have their beliefs. He even suggested that a longer incision bringing out the whole gravid uterus would compromise the milk production of the mammary gland and so vets who incise the abdomen from umbilicus to pelvis as stated in the vet books have had damaged the milk system, leading to poor quality milk production.

Posted by toapayohvets at 8:37 PM