I had closed my surgery at 4 pm as usual on Saturdays. The breeder decided on a Caesarean section at 6.30pm since his 63rd-day pregnant Dachshund had not given birth and was starting to scratch. He did not want to wait till midnight. He could have the C-section at 3 pm as his worker had told him that his Dachshund's rectal temperature had dropped to 37.7 deg C in the morning. With a drop of temperature, the dog is ready to give birth and could have an elective C-section. The breeder decided to wait to "save money" paying the vet. But no puppy came out and without much delay, he phoned me.

4 puppies and dam are alive. Milk was present. The breeder was over the moon. 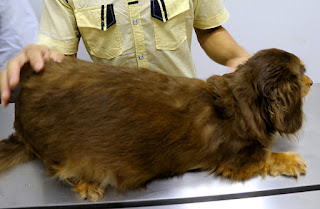 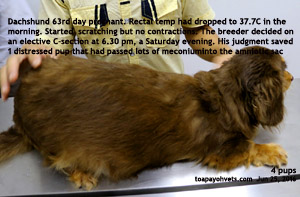 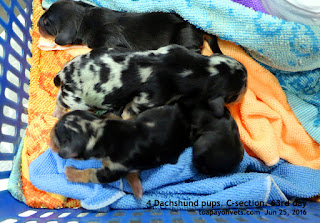 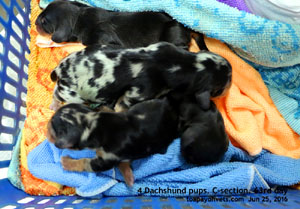 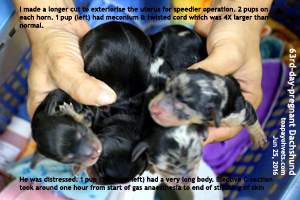 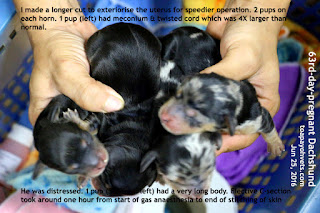 1 of the 4 had yellow stools (meconium) inside the amniotic sac. He had pooped a lot. His umbilical cord was swollen 4-6X and this would be due to his placenta being twisted.

FOLLOW UP 24 HOURS LATER
I phoned the breeder 24 hours later. He said all 4 pups are OK. They were nursed by two surrogate poodles as he had a bad experience of the previous Dachshund providing "toxic" milk to the 3 large pups I had delivered by C-section. Those 3 pups died on the next 2 days, attributed by the breeder to the toxic milk. So he was not taking chances. He fostered the present Dachshund dam with older puppies as they would be stronger in case this Dachshund has toxic milk.

I was most surprised that the other Dachshund had all 3 puppies dead as they were alive and OK before they went home from C-section at Toa Payoh Vets.  "Did you use anti-tick wash on the dam before C-section?" I asked this experienced breeder as yesterday's Dachshund had many small ticks. The breeder normally hand-picked the ticks and might use Frontline spot-on to get rid of the ticks. The breeder said he does not use tick insectides and so the mystery of the "toxic milk" remains.


Posted by toapayohvets at 1:15 PM