Yesterday, at 6 pm. Dr Daniel had Caesarean section and delivered 4 kittens, said to be 67 days old by the owner. Their toe nails were white and 2 mm long and the coat was thick. The kittens were wrapped up in shrunkened oily waterbag and did not move at all.

The first of the 5 kittens was born naturally at around 6 am. The owner phoned a vet who quoted $200 to $500 for a C-Section, but when he came to the clinic, the vet said it would be $1,000. Some unpleasant conversations led to the vet telling the owner to get lost as he was deemed "abusive".  Hewent home.

He called Toa Payoh Vets at around 5 pm and that was how the C-section was done.

I had performed over 200 C-sections, mainly in breeders' dogs and had encountered such a situation of oily waterbags and dead puppies due to long delays in seeking C-section. So, there was no chance of recovery. Water had filled up the lungs and the kittens could not breathe.

As witnessed by the intern, a Seconday 3 student from CHIJ, Ang Mo Kio, I swung the kittens, pinched their neck skin and cleared their mouth and nostrils  of mucus.  Lots of water came out from the lungs when I swung the kittens in an arc for around 5 times/kitten. .

For over 15 minutes, my intern and I stimulated the kittens. 2 had faint gasps of breaths every few seconds and were not moving. But the other 2 were "dead". The gasping kittens would not pass away over the next 5 minutes and so we continued rubbing them.

Judy the assistant, came out of the op room, after the dam was stitched up and would rub their chest back and forth as they lay sideways.

"The one with gasping will live," Dr Daniel took over after he had stitched up the dam. Time would have been over 30 minutes by now. Only one gasping kitten's body was warm. The 3, including the occasional gasping kitten were cold. The 2 gasping kittens would not pass away. I put their mouth into mine and blew in air to inflate their lungs. Many vets feel squeamish about such a procedure but it would save lives if the lungs had been cleared of mucus by swinging the kitten in an arc and seeing the mucus dripped out.

Dr Daniel and Judy used a hair dryer to warm the 4 kittens. It took some 10 minutes.
of more rubbing. A drop of adrenaline injection SC.

It is hard to believe. The 4 kittens were moving. So I got a video done to prove it. However, there was no video done before that and so, it is up to the readers to believe or not my incredible feline story of 4 kittens returning from death's door. 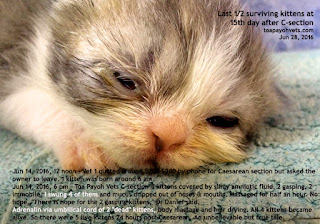 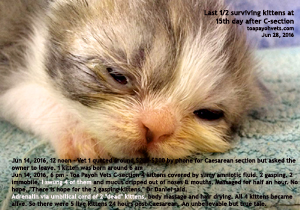 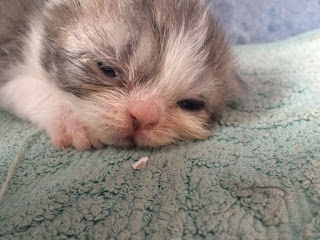 Posted by toapayohvets at 5:24 PM