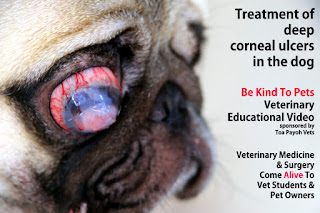 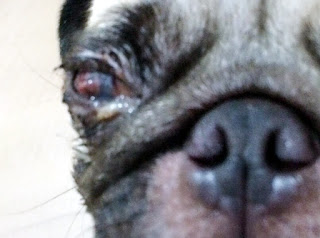 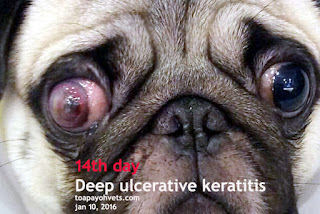 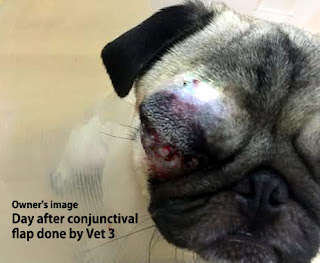 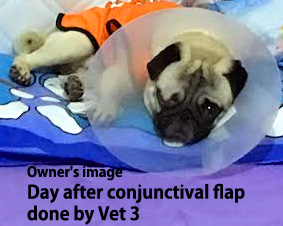 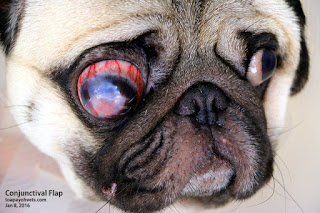 NARRATE THE 2 IMAGES OF MEDICAL HISTORY 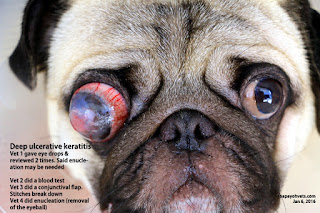 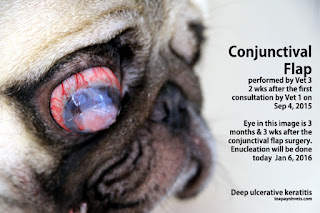 WHATSAPP IMAGES TO DR SING K Y ON DEC 29, 2015
for advice and query on how much it costs to get an artificial eye ball.  The owner had paid for Conjuctival flap surgery by Vet 3.

The owner has to decide
on enucleation (removal of eyeball). An artificial eyeball add to medical and surgical cost. 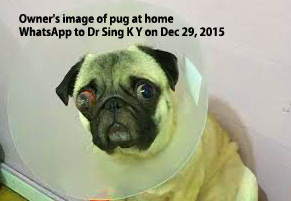 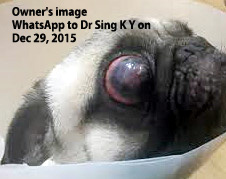 No vet can guarantee successful eye surgeries as there are many factors involved, including post-op care by the owner. Some owners want the dog back home on the same day of surgery
but do not know how to nurse the patient. In many of such cases, the surgical outcome can be poor.

In this pug, the owner considered that the surgery had a poor outcome.
The eyeball had popped out and become bigger.  This is one side of the story. The other side from the vet has not been asked
.
An image of a successful conjunctival flap surgery 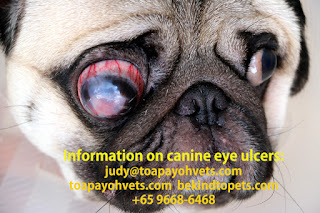 EARLY TREATMENT OF ONE PUG WITH DEEP CORNEAL ULCER IN 2011 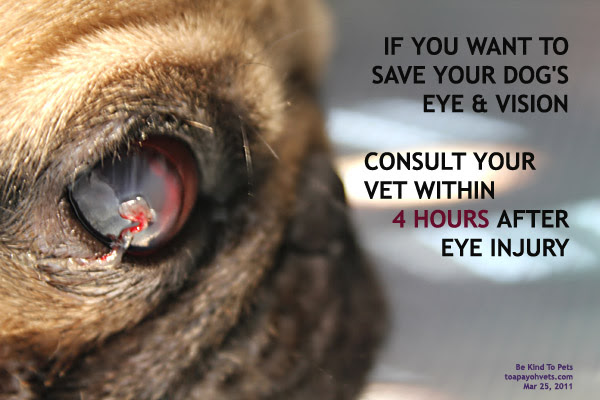 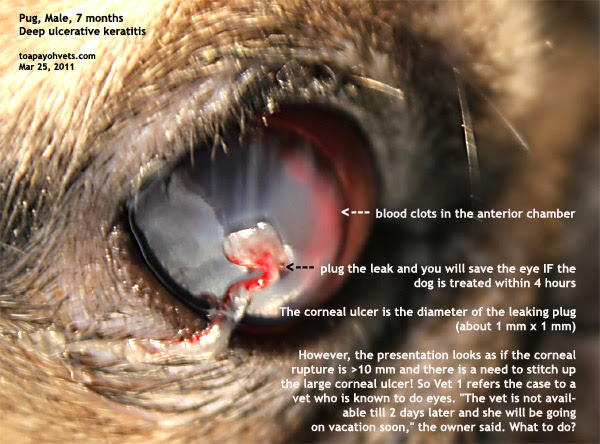 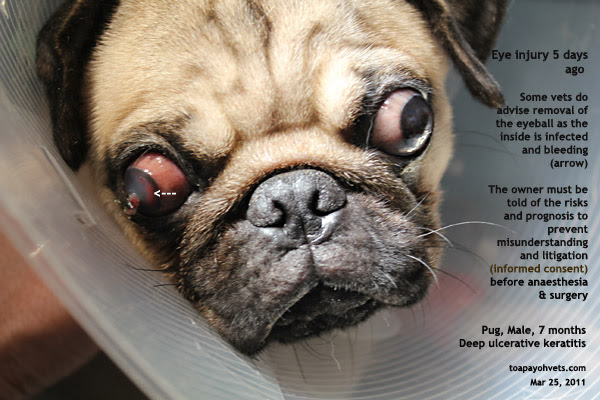 Illustration of my surgery - 3rd eyelid flap and tarsorrhaphy on Mar 24, 2011
This surgery had been performed in a 14-year-old Silkie Terrier in 2015. The video is at toapayohvets.com.videos.htm 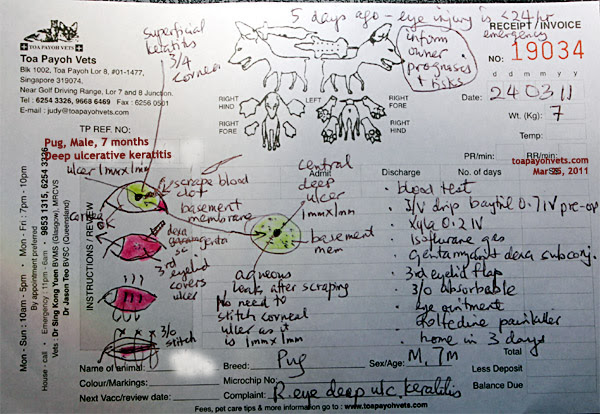 The pug's eyelids are sewn up after the 3rd eyelid flap surgery. In-patient for 3 days.
Eye ointment is given daily via the gap in the medial canthus 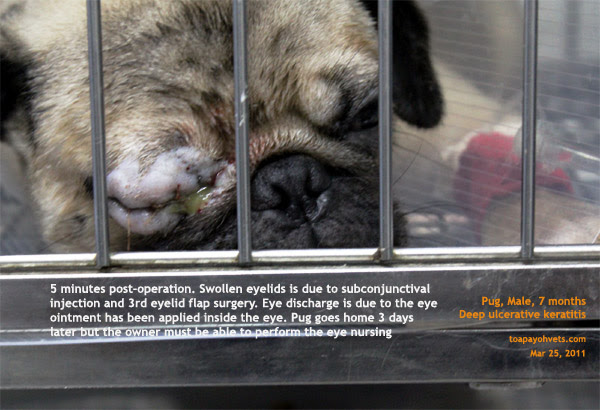 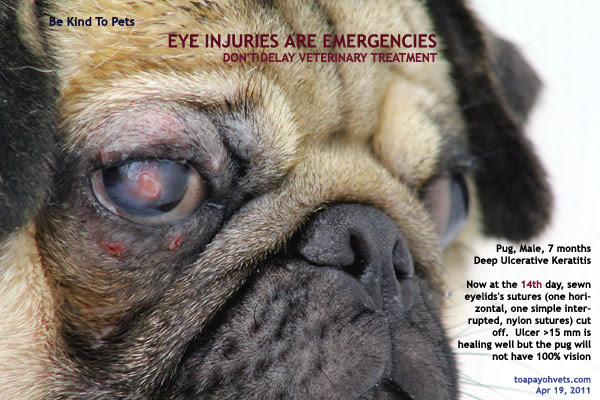 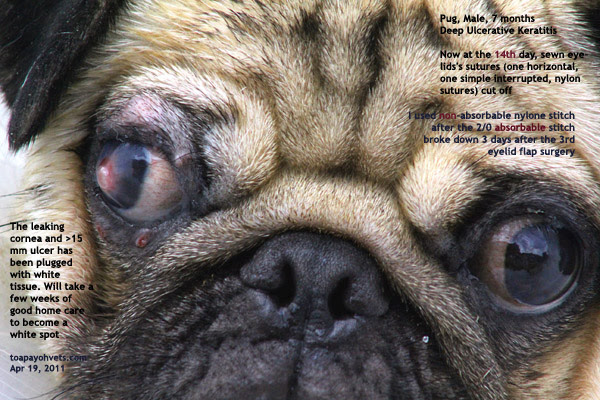 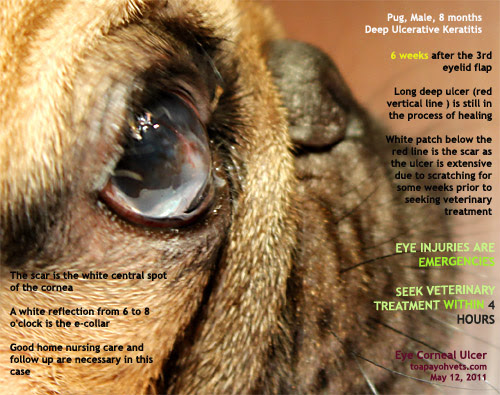 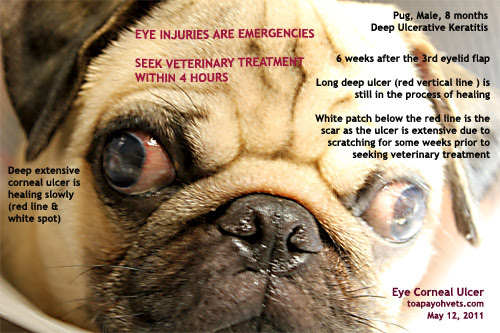 42 days after 3rd eyelid flap. The ulcer is healing slowly as it is deep and extensive. On the 42nd day, the owner came for a review as the dog's eyes were reddish. However, the vertical ulcer has healed but not fully while the 6-8 o'clock corneal ulcer has changed to a white spot.

No more visits from the owner as the pug's eye injury has healed.
Posted by toapayohvets at 7:26 PM