2150. A female Miniature Schnauzer has bladder stones packed to the gills again

Another case of recurrent struvite bladder stones 19 months after removal by Dr Daniel in Oct 3, 2013. This 5-year-old female Miniature Schnauzer has bladder stones packed to the gills.
Schnauzers have a familiar tendency to develop urinary stones and owners need to monitor the urine and do X-rays regularly to prevent recurrence.


Nearly 100% of the Schnauzer owners do not bother to come for regular monitoring and they either put the dog to sleep, get the dog operated again. But some kidney stones are inoperable as the dog also has septicaemia and kidney failure.

Images of today's surgery for this female Schnauzer are: 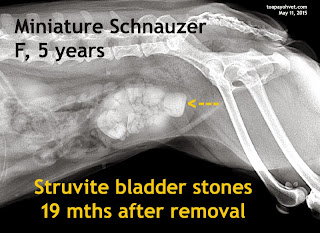 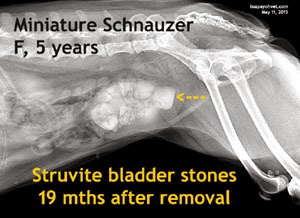 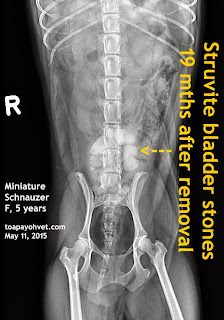 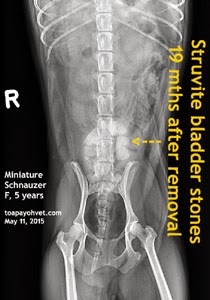 
1173. Audit: A young Miniature Schnauzer has a bladder full of big stones 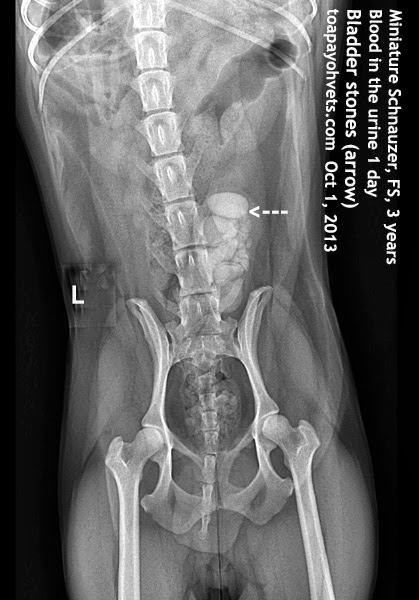 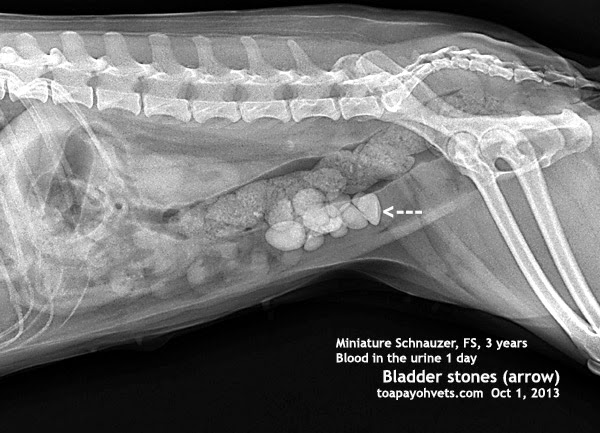 "The urine test on Oct 2, 2013 shows the presence of occasional numbers of calcium oxalate and triple phosphate crystals," Dr Daniel said to me when I asked him about the urine test after he had completed the bladder stone removal surgery. He could see that the few numbers of crystals in the urine does not co-relate with the number of formed stones which exceeded 20 big and small ones in this case. "Absence of crystals in the urine" does not mean there is no bladder stone. X-rays will be best.

Each vet has his own approach to this type of surgery.  He had injected saline into the bladder to check for leaks and there was none. "A fine needle was used," he said to me. I am aware of this way of checking for leakage. Usually I inject saline via the urinary cathether in the female dog.

I did a video of the stones being taken out as there were numerous. I had done videos of bladder stone removal and so I do not video this type of surgery as it takes a lot of time to produce a video.

AUDIT OF THIS CASE

Feb 24, 2012. I spayed the dog. Uterus was enlarged but not from pregnancy.  Blood test normal.

Nov 30, 2012. Blood in the urine. I advised urine test and no dry food. Urinary tract infection.

Jul 14, 2013.  During annual vaccination, I palpated the bladder and felt "crepitus" - feeling of gas and bladder stones rubbing against each other inside the bladder. I advised X-rays as I was quite sure these were bladder stones.

Interestingly, I recorded the following 4 words "Dr Daniel said no." I had asked his opinion and he had palpated the bladder. Sometimes I would be present during his consultations as a mentor.

Every vet has his or her own opinions and each vet, after palpation of the bladder may give different points of view as in this case and that does not reflect on the vet's competence. X-rays will be most helpful but the owner came for vaccination and not for urinary tract problems like blood in the urine. 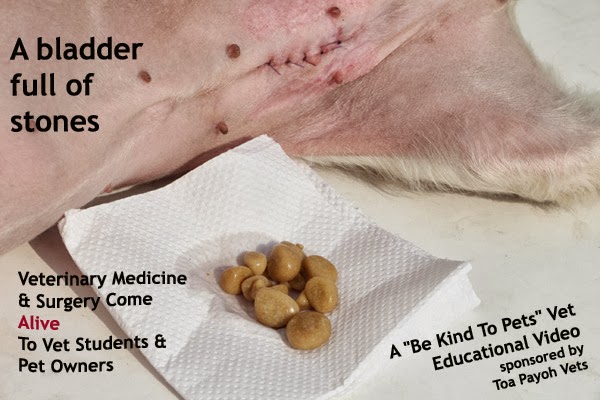 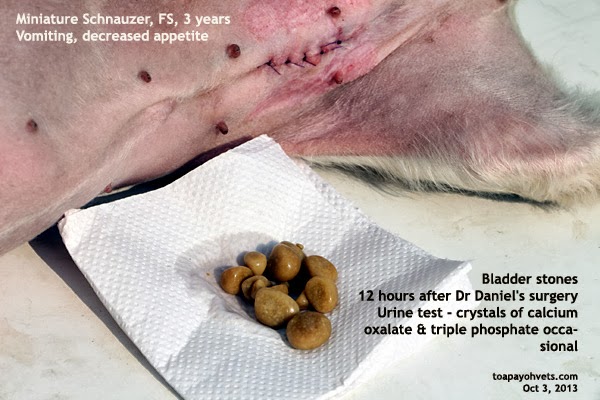 FOLLOW UP WITH OWNER ON OCT 3, 2013.
The owner said that he had given canned food since my advice to cut out the dry food in Nov 2012. He said that his relative's Shih Tzu called Mikki also had similar problems and eating the same brand of wet food called "Burp". I remember Mikki. He had difficulty in urination and urine tests showed triple phosphate. X-rays showed no stones and the dog is on S/D diet for the time being till the urine test is negative.

It is important to follow up with the owner but this takes time and some vets may not want to do it. As to what to do now after the operation, the stone analysis will need to be known first. From appearance, I would say they are struvite stones. S/D canned diet for 1-3 months and urine test 3 monthly will be my advice but many owners have their own ideas.

It is my opinion that the stones were formed much earlier and the changing to "Burp" canned food was too late and probably does not contribute to the struvite stone formation unless it alkalinises the urine. The bacterial infection of the bladder in an alkaline urine causes triple phosphates and struvites to form. It is inconclusive evidence that "Burp" cause the formation of stones.

"Miniature Schnauzers are one breed famous for bladder stones," I said to the owner.

Circumstantial evidence of "Burp" causing bladdder stones in this Schnauzer is made because  Mikki had similar difficulty in urination problems too when fed on "Burp". But no stones were seen in Mikki's X-rays. I remember this Mikki very well since this Shih Tzu's owner had two episodes of urination difficulties in Mikki. In the 2nd episode, the couple had the X-rays done and no stones were seen. Now the dog is on S/D diet and so far, no more dysuria problems. Mikki is another story.

Owner is satisfied today as the dog is active, eats and drinks. Urine no blood. Stools normal.

UPDATE IN MAY 12, 2015
The owner did not come back for check up or follow up since the first surgery done in Oct 2013. The stone analysis reveal MAP (Magnesium, Aluminium, Phosphate) and Calcium.  Yesterday, the dog was operated and more than 40 large stones and a hundred small ones were removed from the bladder. The kidneys do not have any stones.  See top of page for latest information.


Posted by toapayohvets at 4:06 AM