1491. SCRIPT FOR INTERNS Dropping of rectal temperature as a sign for elective Caesarean section

"The second vet asked me to come back for the elective Caesarean section when the rectal temperature dropped to a low level, as that means that the dam is about to give birth!" the gentleman said. "Then the nurse wanted to postpone the surgery to 2 days later as the vet was on compassionate leave. His mother had passed away. I know there are a few vets on leave at this clinic, but what about my dog? She can't wait. It is already the 64th day. Can she wait to the 66th day or 70th day?"

So he contacted Toa Payoh Vets and spoke to Dr Daniel about monitoring the rectal temperature.

At 5.00 pm today, I answered the phone as Dr Daniel was off, having his hair cut.

He asked whether the rectal temperature of 37.3C was due to the air conditioning and should he wait till night time to wait and see if the dam will contract. Only when there is contraction would he proceed with the elective C-section. I asked him to take the rectal temperature after 10 minutes. The reading was 37.3C and so had nothing to do with the air conditioning.

Nowadays, young Singaporean owners read much from the internet and may have more information than the vet. And much higher expectations of customer service and good outcomes.

But this man does not know that there is such a condition known as uterine inertia. In this condition, the dam does not show uterine contractions even when the puppies are due. As a guideline, most puppies are born between the 58th and 63rd day after mating and his dam showed no signs of contraction.

"Taking the rectal temperature is only a guide," I said. "You are supposed to take the temperature every 2-4 hours. Otherwise, you may miss the dropping of temperature signalling impending parturition."

My assistant Naing weighed the dog and took the temperature. The weight was 4.3 kg. Temp was , 37.5C.

"The temperature is rising and in theory you ought to take 2-4 hourly. Otherwise, you may miss the drop. In any case, you cannot rely on temperature alone. There is the clinical signs of uterine contractions, vomiting, nest-making. The gestation period of 58-63 days and your dam has reached 64th day. Overdue puppies may be dead."

I checked the dam. The belly was symmetrically enlarged. "Unlikely to be 3 pups," I said. "The belly will be lop-sided if there are 3. It could be 4 pups, but your ultrasound said 3. "

ANAESTHESIA. Gas only. Isoflurane + oxygen.  The dam was quiet.
SURGERY. Dr Daniel came back and we did the surgery together. I was expecting the pups to be active and kicking on being taken out of the water bag. The first pup was as dead as a dead fish. No tongue movement. No cries. 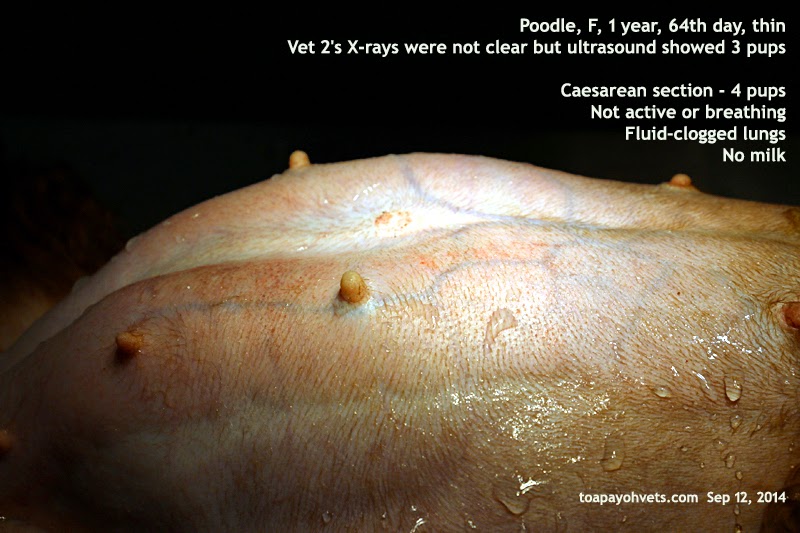 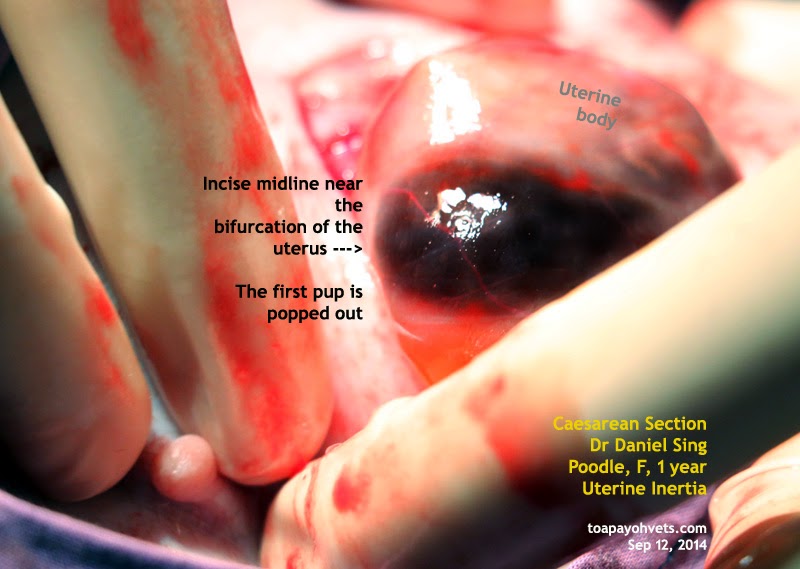 "Check the uterine horns carefully," I said. "Take out both uterine horns."
There was a 4th pup lurking far in the left uterine horn nearer to the ovary. He was much distressed and dead too.

EMERGENCY SWINGING
I swung the pups 5 times first. Mucus dripped out from the first pup in large drops. This pup was stuck and had breathed in the amniotic fluid. So had the other 3 pups. I rubbed the neck. My assistant rubbed. No cries for over 5 minutes. Normal pups cry in a few seconds. Were they dead?

I rubbed and pinched the neck skin, teaching my assistant to do so. Faint cries from the first pup after 10 minutes. The other 3 took longer time. After a long time, the 4 pups cried and that was OK for them. 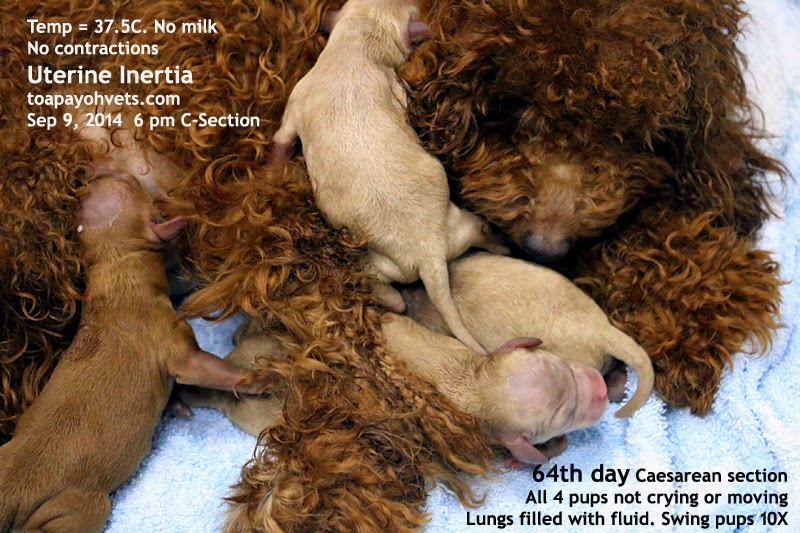 PROBLEM No milk production even at 64th day. The dam is thin. Oxytocin 1.0 ml SC given after Caesarean section at 7 pm. Milk let down overnight. Puppies suckled vigorously.

POST OP"Tape over the C-section wound is too broad and covered the nipples," I got the new transparent tape narrower pasted onto the wound..

"E-collar is not practical as it may cut the puppies. In any case, the dam has to lick and clean the puppies' backside and belly. So, the e-collar will be inconvenient for her. Methone, a painkiller at 0.25 mg/kg had been given by Dr Daniel."

The owner's friend had his trousers sprinkled with blood clots when he carried the dam. "Bleeding is normal but not serious. Usually last 2 days."


CONCLUSION
When to do elective C-section?  Too early, the puppies will be premature and stillborn. Too late, they are distressed and can't breathe. Swinging hard in an arc from over my head to the ground level shook out the mucus. Twice. The outcome was happy. The dam had no milk but with the 1.0 ml of oxytocin injection, the milk would flow.

He asked whether he could bottle feed the smallest deprived pup with a commercial milk brand. The dam curled her body and so the littlest pup could not get the back nipples commandeered by the 3 bigger siblings.

"Best not to do it," I said. "He might get diarrhoea and die. Just take away the 3 strong ones and let him suckle."


The second vet's X-rays could not reveal number of puppies as the skeletons were "hard" to see. Ultrasound then showed 3 puppies.


CONCLUSION
His usual vet (first vet) does not do C-sections and informed him early. The second vet did a good job giving an I/V drip during early pregnancy when the dam was vomiting. However, she or her senior was absent due to compassionate reasons (death in a family) and the nurse phoned to postpone the C-section 2 days later than today. This does not cut ice with him as there ought to be a replacement vet in the practice. I would have asked him to go to other vets if I could not provide the service.

The rectal temperature of the dam was dropping to below 38 deg C. This increased his anxiety of the fate of the puppies if he had to wait to the 66th day.

It can be quite stressful being a first-time home breeder with a first-time dam. This poodle was overdue at 64th day. Small breeds like the Chihuahua and poodle can produce distressed and dead pups if they are overdue.

The best time for an elective C-section in small breeds is 60-62 days, in my opinion and experience with over 300 C-sections done some years ago for the professional dog breeders.  The date is counted from the date of first mating. No milk was present in this dam. With milk present, C-sections are confirmed.

This case shows that there is a large variety of presentation of impending parturition. Judgment of the vet can affect the life and death of the puppies as to when to do C-sections. The drop in rectal temperature is not a reliable indicator of impending birth if there is uterine inertia or the "single pup" syndrome.
INFANT DEATHS IN PEOPLE
According to the United States Central Intelligence Agency's World Factbook, Afghanistan, Mali and Somalia have the world's highest infant mortality rate of more than 100 deaths per 1,000 live births. High is considered to be 40. Singapore, Norway and Japan are among the lowest, with fewer than 3 deaths/1,000 births. Improved family and community care are important and inexpensive ways to prevent most infant deaths.

Posted by toapayohvets at 8:24 PM