1478. A 15-year-old dog has a large facial lump below the eye - carnaissal tooth abscess?

The family vet said that the 15-year-old dog was too old for anaesthesia to remove the facial lump.. He prescribed medication. The soft swelling grew bigger and bigger.

"It did disappear once but it surfaced again below his right eye." the lady said to me on this fine sunny August 2014 day...  The location of the swelling and the thick tartar encrusting the teeth (dog was dental scaled 4 years ago by the reluctant family vet pressurised to do it as he deemed the dog too old at 11 years of age for anaethesia). 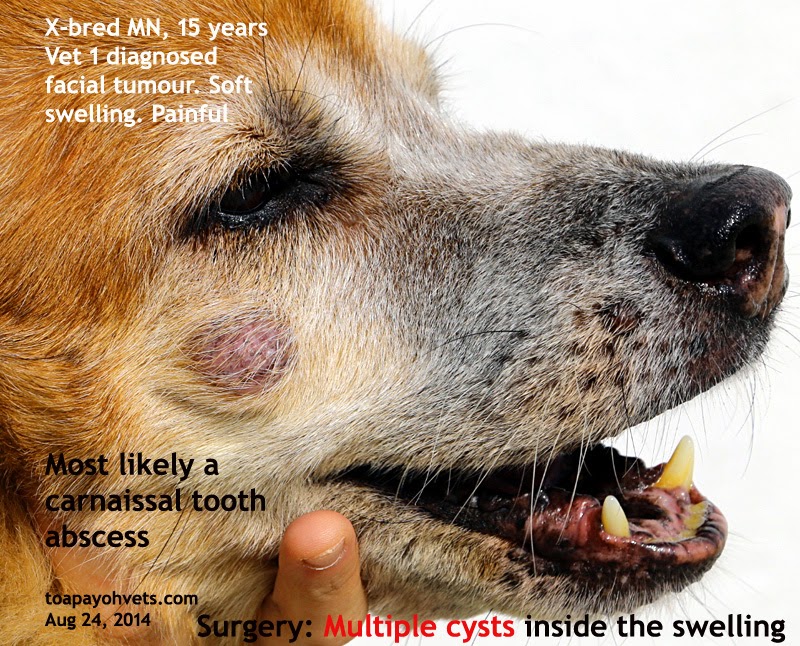 "It looked very much like a carnaissal tooth abscess also known as a malar abscess," I said to the worried young lady. "The soft swelling would be the pus from the root of th infected upper 4th premolar tooth breaking into sinus and then the skin, accumulating under the right eye."

Anaesthetic risk had increased greatly now that the dog is 15 years old. One dog's year is around 7 human years and so the dog would be equivalent to a person aged 105 years.

"Health screening can be done first," I auscultated the heart and got a blood test for complete cell count.

The dog had a left heart murmur. That is why he coughs when he lies on his side. Fluid had accumulated in his lungs. A coughing dog is at higher risk for anaesthesia.

I prescribed heart drug medication and antibiotics for the next 7 days prior to anaesthesia and dental work up. On Day 2 of medication, the dog coughed continuously overnight.

She SMS me, as all young people do, rather than phone:
"26.8.2014 Tue. 5.03 am. K has been coughing non stop. Almost 7-15 coughs every 1-2 mins at times. Longest interval is perhaps 5 mins. He could hardly sleep. I can't wait until Thurs to see u again. may I know what can be done? V distressing for us.. lany jabs to suppress the coughing? His yellowish green eye discharge keeps coming after I've wiped it off. Please advise me next course of action?Appreciate it lots..

The lady and family members were much worried. I got the dog down for a check up. He was not coughing continuously at the Surgery.

The heart disease medication should be working to reduce coughing while lying on the side. But now the dog was coughing more, even when lying on the sternum. I phoned her to give furosemide tablet two times a day instead of once and stop all medication and to bring the dog down at 9 am on 26.8.2014.

As no chest X-rays were done to lower medical costs, ausculation and coughing history were the only means of diagnosing heart disease.

The owner gave informed consent for anaesthesia, dental work and exploratory surgery of the facial swelling. It was a cluster of cysts! 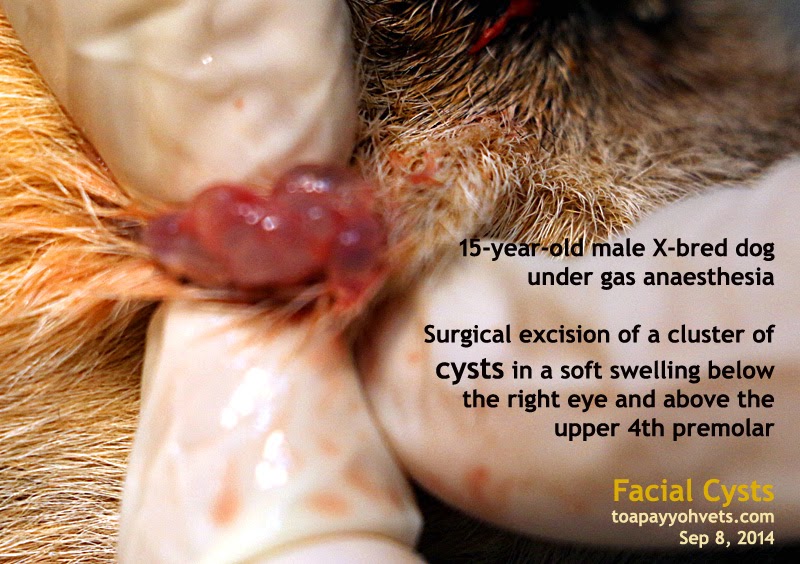 No carnaissal tooth abscess. Another surprise. The teeth were all white and solidly strong. No loose teeth. As at Day 5 after the first consultation and antibiotic eyedrops, the dog is more active.

"Hi Dr Sing. K is almost back to normal now. Eyes ok. Energy level getting back. Wound healing up and teeth so cleaned. I'm really very appreciative. Thank u so much (a frog symbol)".I have never seen a smiling "green frog symbol" at the end of an SMS. What does it mean?

She did not mention whether the dog still coughs?  So on 28.8.2014, I SMS:
"Is he coughing lying down n on his sternum?" Another SMS from me: "How is his appetite? (a poodle symbol at the end of the SMS).

"Coughing is very much reduced. He could sleep on his side and sternum since yesterday already. Peeing and pooping normal. Appetite good too. she sms.

2014 SMS FOLLOW UP
28,8.14  She sent me 3 images of K. "He has energy for longer walks" she sms.
"Need to let heart recover. Could have heart and lung bacterial infection in the past few days". K's eye discharges now no more.

"Once the medication is over, is there a need for review?" she sms

"High (blood) calcium. Need to check parathyroid hormones or do a blood test 4 weeks later. Heart disease medication may be needed to prevent coughing. Need to use warm water and cotton to scrub (facial) wound to remove blood. Your dog's cae really show that the vet has to physically cut open the (facial) lump. Not a carnaissal tooth abscess as it seems. Never judge a book by its cover but we do."


"K is coughing less but still not totally gone. And he is sneezing a bit today. I am still giving him the medication. (He is) sleeping well." she sms.

"Wait and see. Heart may need time to recover."

She sms K sleeping on his right side. "A peaceful sleeping dog."


This is one of the rare cases of a 15-year-old dog who came for a enlarging facial lump which was a facial cysts (evidence from video and images). I have never seen a facial cyst in my 30 years of practice. More than 10 cases of carnaissal tooth abscess. 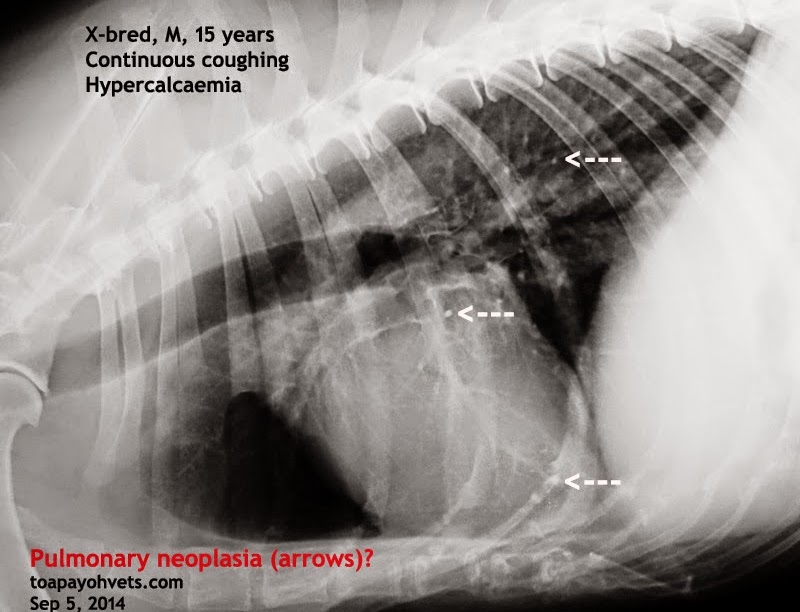 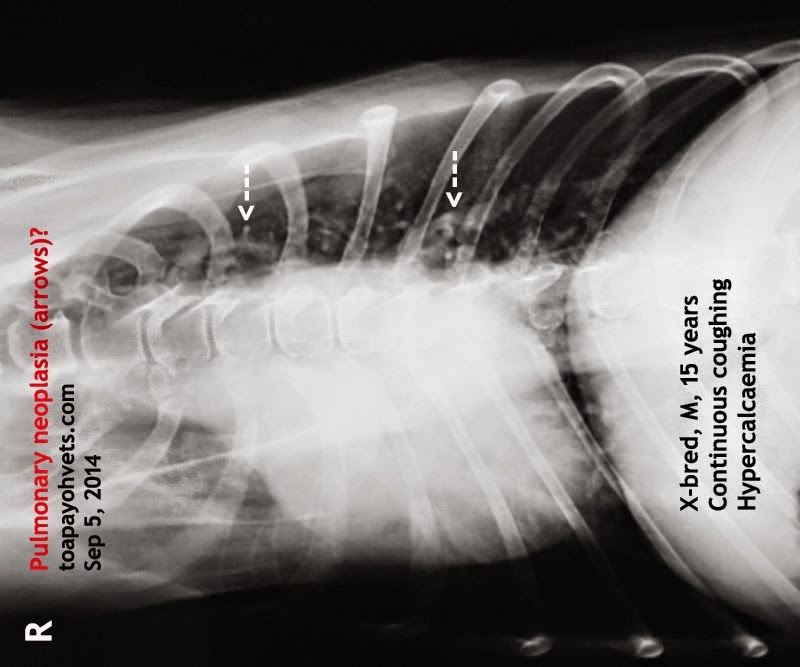 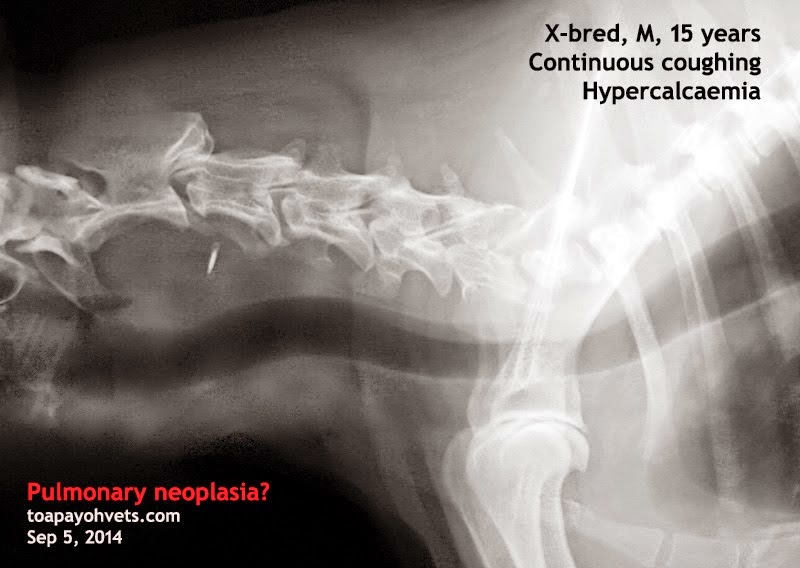 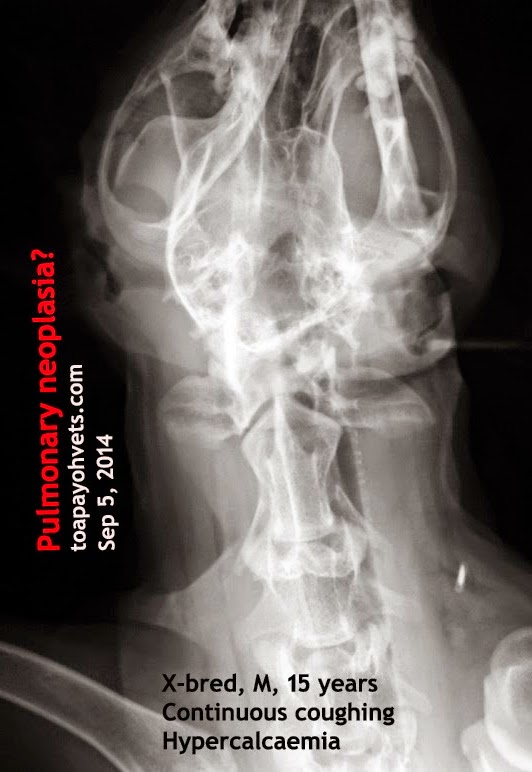 Surprisngly, I have one old dog with a discharging carnaissal tooth abscess. The blood test of this dog showed a very high total white cell count and so the dog would be operated only one week later after antibiotics. The lady owner was most worried but surgery could not be rushed into as the infected old dog could die under anesthessia..This would also be a case of oro-nasal fistula.

Posted by toapayohvets at 2:10 PM