This is my first time to visit Phnom Penh, Cambodia. I am not keen in visiting the "Killing Fields" or the temples as I had seen the best ones at Angkor Wat in Siem Reap. Street photography is my hobby and Phnom Penh with 80% of its 16.5 million inhabitants should have much more interesting scenes than sterile Singapore. I was not disappointed.

Sisowath Quay in Phnom Penh reminds me of the Esplanade of some 40 years ago where young couples meet for a date and view the lappng sea waves and see the ships. Maybe ordered some satay to eat. It is not the present day "Esplanade Theatre". I did invite my pen pal to walk along that Esplanade and we were so young then. Sisowath Quay so much reminded me of those days gone by.

My impression of Phnom Penh is a city of high competitivenss. I met a very old white-haired gaunt-looking sharp faced woman and her thin grand-daughter at "The Central Market" and she asked for some money. "Give her some money," I said to Julia as we boarded the tuk-tuk to go to Nagaworld for lunch. "No," she said. "If I give her, many beggars would rush forward." Actually, I don't see any beggars. In any case, she handed her a note and the woman clasped her hands in grateful thanks. Beggars are rare in Singapore too but they do exist. Recently, one older woman asked me for some money to buy food when I had lunch in the coffee shop near Courts Furniture in Toa Payoh. I did not encounter other beggar in Phnom Penh during my 4days/3nights' stay and I would say they are rare too.

As for competitiveness, I note that Nagaworld is probably No. 1 in earnings power as it has a casino and many food outlets compared to Phnom Penh Hotel where I stayed since Nagaworld's rooms were fully booked. I booked the land tour package at the last minute as I don't believe in early bookings. So, I had to pay more for Phnom Penh Hotel which is 4-star compared to my desired Nagaworld which is 5-star and cheaper. But, like any professional, what is the point of being cheaper when one is unavailable?

Soliciting for business is important for tuk-tuk transportation, boat cruise operators, small boys and girls who sell Lotus fruits, drinks, magazines. I saw one teenaged boy still at the roadside selling Lotus fruits at 9 pm
yesterday (May 2, 12). It was so dark on the distant Sisowath Quay area but he was still around.

A Lotus fruit vendor is shown in the images below. 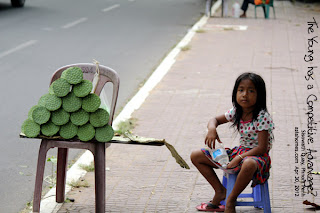 Will upload more pic when I am back in Singapore.


Posted by toapayohvets at 8:44 PM