3342. Veterinary Surgery Stories: The breeder never forgets what the vet did to his dam


Veterinary Surgery Stories from Dr Sing Kong Yuen, Toa Payoh Vets
- The breeder never forget what the vet did to his dam


"8 puppies dead after Caesarean section," the breeder showed me his mobile phone image of a dam and 8 dead puppies. He was not going back to this vet for any surgery. He did not know what had happened but he expected no deaths of the dam and puppies in any Caesarean section. He was 85 years old and had been breeding dogs for over 40 years. Still active working hard when other breeders have retired and had knowledge of the competence of various vets performing Caesarean sections for him.  .

I had performed over 10 Caesarean sections for him without deaths of the dam and pups in the past 2 years. So he was satisfied with me though he tried to knock down my fees by saying: "I can get 3 to 4 Caesarean sections done by the other vet for the fee I pay you!"

Some 15 years ago, I was like the other vet, charging $300 for any Caesarean section of the breeder's dog at any time of the day and night. The usual vet was suspended from practice for around 10 months for selling vaccines to breeders who would do their own vaccinations. One big breeder used my services and others followed. I had performed over 200 Caesarean sections in around 3 years till a younger vet was favoured by the breeders.

I could devote more time to my private clients and had more sleep after midnight. On Jan 23, 2018, I was awake as I had been to a friend's house for dinner. The friend had an electrical blackout and it took time to locate the source in an external wall light being exposed to rain water. So, this breeder's phone call to me was received as I drove home.

"I was going to bed after delivering a second Dachshund pup naturally," he said. "I saw this Dachshund straining very hard. Her water bag had ruptured but no pups came out for more than an hour."

He had given 0.5 ml oxytocin but no pups came out. So he played safe and phoned me. I did the Caesarean section for him. The 2 pups were large. He was pleased that the spotted one was female. This Dachshund had a large single pup delivered by Caesarean section by me one year ago. Now, she could not give birth naturally and her swollen belly gave me the impression she had 4 pups or 6 pups. She had 2 large ones. 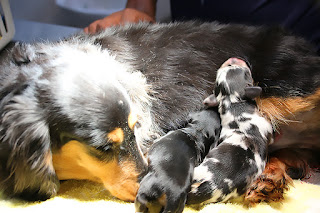 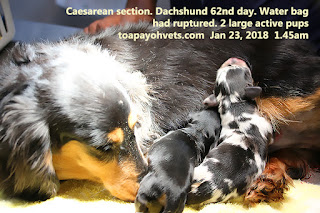 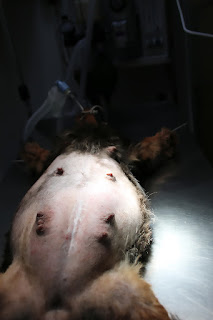 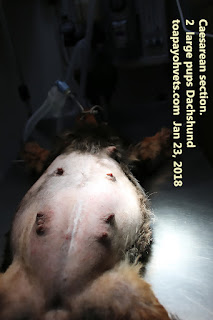 What the breeder expects is a happy outcome: "No deaths of the dam and pups."
I use solely isofluranne gas and achieve this outcome.
A good veterinary assistant monitors the anaesthesia closely.
Posted by toapayohvets at 2:49 PM