2976. A Singaporean hamster owner's search for a hamster vet

Im an owner of a year plus dwarf hamster. Few months ago i brought her to a vet (i shall not mention) and found out that she has a growth internally. But the vet couldn't do anything as claimed that my hamster might die during the surgery.

I notice my hamster is still active after months and saw her wanting to run on her wheel but i guess she is in pain she stop. So i brought her to another vet as i would really want to try again if she can be cured. The vet wanted to charge me $400 for the surgery and i understand that with her old age she might not survive the surgery but then paying $400 is not worth if i cant have her back alive.

Can you please advice how much will your clinic charge to do internal surgery about 4cm big. I really hope to have her life longer :( 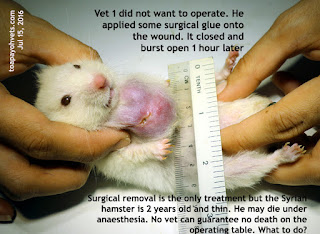 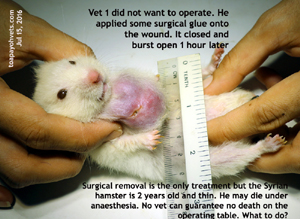 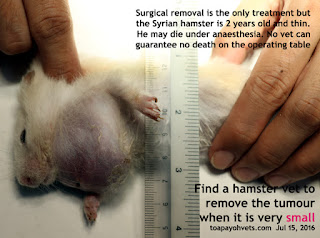 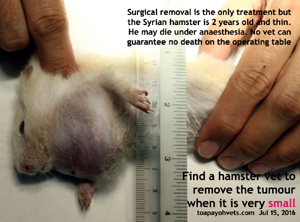 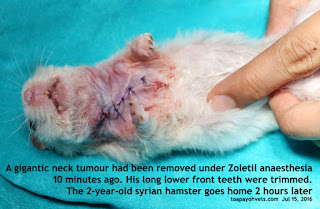 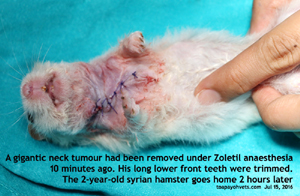 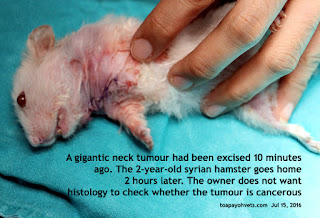 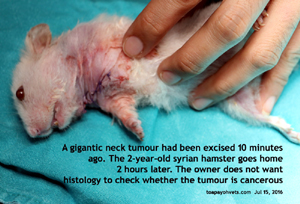 The above-mentioned hamster was discharged on the same day after operation to save the owner some money. He was active and eating on the 2nd day.

On July 18, 2016, the owner phoned me at 8.20 am saying that the hamster's wound was swollen and smelly since yesterday, Sunday. She should have quickly brought the hamster back yesterday.


This video shows the operation of another hamster with a large neck tumour, similar to the one above.

The operation is done by Dr Daniel Sing and I took the video to educate hamster owners.

It is a coincidence to get 2 hamsters with similar gigantic neck tumours within 10 days. They are owners who surf the internet and come to Toa Payoh Vets.

A much smaller early tumour can be easily removed but many hamster owners do not come early, for various reasons. Some have had consulted a vet who is not keen on hamster anaesthesia as it is really risky. In this case, the hamster almost died. But he is Ok.

In 2015 and 2016, Toa Payoh Vets have at least one hamster case per week, thanks to the internet surfers.  In some days, we have terrapin, rabbit, guinea pig and hamster cases all in one day, in addition to dogs and cats.  So, it is never dull every day.


Posted by toapayohvets at 5:50 PM