The mother and pre-teen daughter complained that this 2-year-old dwarf hamster had a red bald patch on the right backside area and was itch scratching continually. I observed the hamster and saw the scratching (video) mainly on the right side.

Some vets perform physical examination which does not involve picking up the hamster to examine his lower body. After all, this is such a small creature and everything can be seen at one look.

I picked up this hamster. Surprisingly, there was a hidden lower elbow wart! This could be the irritating inflamed growing wart that caused the right sided itchiness including right ear scratching and the left backside biting wound. Biting and scratching provide instant temporary relief of pain. This was my hypothesis. 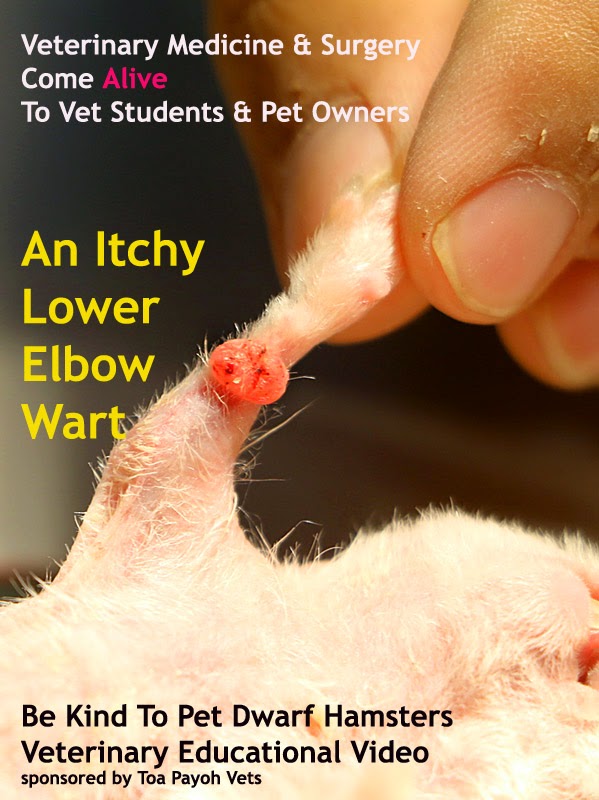 If my hypothesis is correct, electro-excision of this ventral wart would resolve the problem.

Now how to excise this wart which extends the whole width of the lower elbow? It is a gigantic wart if you imagine your lower elbow's width being occupied by a large wart. Should the vet use scissors to excise it and how to control the post-op profuse bleeding?

The hamster is aged, being 2 years old and has around 6 months of life generally. Would the hamster die under anaesthesia and therefore damage the vet's reputation?

What to do to resolve this problem without killing the hamster? Reputational risks are more important for a private vet. Nobody will refer cases to him if he or she has hamsters dead on the operating table.

I decided to give the hamster only isoflurane gas anaesthesia. I used the circular electric loop wire to electro-excise the wart in a split second when the hamster was just anaesthesized by the gas. I used forceps to lift up the wart and excise under it. There was some normal skin. The wart came off and there was just a 3 mm wound. Blood-less. See video.

The hamster went home on the same day and the mother and daughter were happy and satisfied.

In conclusion, if the vet does not examine the underside of the hamster, he or she would mis-diagnose as environmental cause of itchiness and this would not resolve the itchiness problem.

Always examine the underside of the dwarf hamster by picking up the hamster and turning him upside down. This elbow wart would have been missed as it was not protruding. A correct diagnosis resolves the client's problem and bring in more referrals than slick advertising. Vets have to deliver results and perform like any service provider.

To improve the quality of production
1. Not to publish the title of video as this is unnecessary
2. Subtitles to be on white text on a black band. White text not easily read in this video.
3. Subtitles are too rapid to be read
4. The BKTP image is flashed by too quick to be read
5. Weak concluding frames - same videos of hamster still scratching. Should have a post-op video or something similar rather than repeat the opening
6. The backside wound - main complaint was not emphasized.
7. Credits --  more videos at www.toapayohvets.com/videos.htm

Posted by toapayohvets at 4:03 PM