The kind teacher brought one of these stray cats that had lost weight and was not eating for the past 2 months to Dr Daniel on Aug 19, 2013.

Blood tests were unremarkable. X-rays show a circular mass in the abdomen. Exploratory laporatomy showed the lumps which are sent for histopathology.

"There seems to be a stalk," Dr Daniel said.
"They appear to be encapsulated abscesses, peritoneal tumours or some worm masses e.g. round worm larvae migrating from the mouth to the intestines causing such reactive masses."

Mine was all speculation. Histopathology may enlighten me. Stray cats eat hazardous materials as part of their life-style. Did this cat swallow fish bones and perforated her intestines. Then such masses form to wall off the holes in the intestines? 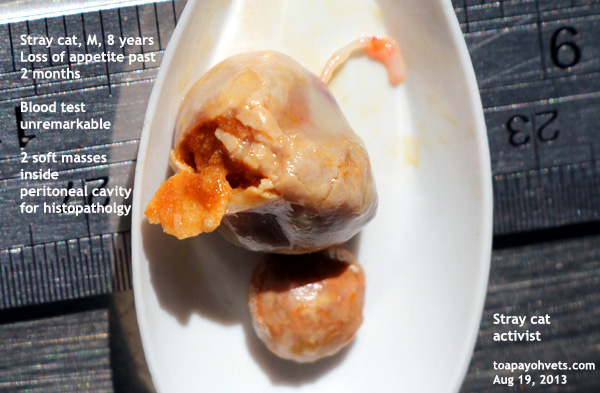 Posted by toapayohvets at 7:50 PM