Case 1. Devocalisation in a Beagle

"The Vet book makes it sound so easy," I said to Dr Daniel as I was preparing to operate on this rarely done surgery using the laryngotomy approach. "Pull out the vocal cords, cut it and suture the ends. There is a very small space to operate and after excising the vocal cords, the ends shrink and there is no possibility of suturing. I use electro-excision to control bleeding. But there is alway a lot of bleeding in this surgery."

Sometimes I wonder whether the author of the article in "Small Animal Surgery 4th Edition, Theresa Welch Fossum" has ever done this surgery in the dog and actually stitch up the ends of the excised vocal cords.

I have done this operation in racehorses with laryngeal paralysis  at the Singapore Turf Club when I was an equine vet. It was also a bloody surgery.

For dogs, there is an oral approach which I don't do as there are complaints of ineffectiveness in many cases. For this Beagle, he was neutered but he still has a habit of barking the whole day long, disturbing the neighbours. It was either death by lethal injection or this surgery. I try to dissuade owners from doing it by training the dog but it is easier said than done.  After some weeks, the owner brought this dog in for the surgery.  In my 40 years in practice, I have had performed around 5 of such operations in the dog only in  cases of desperation by the dog owner. It is not a surgery I will do as it is deemed cruelty.

The operation is recorded to share my experience with other vets researching the internet for such cases.

ANESTHESIA
Domitor + Ketamine at 80% of the calculated weight via the IV drip.*
Dom = 0.45 ml + Ket = 0.56 ml IV at 80%.  5 years old,  14 kg bodyweight.
Atropine 1 ml IM after that. Isoflurane gas + O2 via a smaller endotracheal tube (size 6) so that it can be pushed to one side to access one of the vocal cords for excision.
Maintenance dose as high as 3.5%.
*Dog went rigid and head extended after Dom + Ket were given via the IV drip. Duration of a few seconds. Atropine 1 ml IM given. No recurrences of excitement.

SURGERY
Electro surgery
Dog's head under a bottle, extended neck.
Electro-excise skin and midline of the sternohyoid muscles retracted
Midline of thyroid cartilage electro-incised
Endotracheal tube could be seen taking up 50% of larynx
Assistant retracts thryoid cartilage so that the vocal fold can be seen. As space is so small, it takes experience to see the depression in which the vocal folds reside. View cranially. In the depression, use forceps to pinch out one tip of the vocal fold. Another forceps clamp below. Pull out as much as possible. I used the electro-incision to cut off the fold above the forceps and below the forceps whenever possible.

No stitching of the mucosa of the cut off vocal folds as stated in the Vet book as there is not much space to manipulate. This was not done by me in all my cases.

Lots of bleeding from the surgical areas. Unable to stem the bleeding as it was not possible to locate the bleeders. The less vocal fold area has lesser bleeding. This profuse bleeding has been present in all the past cases including the horse.

Stitch up thryoid cartilage, sternohyoid muscles and skin. Antisedan to wake up dog.


Posted by toapayohvets at 7:32 PM No comments:

"The vet at Serangoon charges only $500," the home-breeder came yesterday. He had already X-rayed and knew he had 3 puppies. Now he was looking for a lowest quotation for a C-Section.

In the first birth, the dam had difficulty giving birth and a puppy had died. He still needed a C-section for the other puppies.

I used to charge $300 for every Caesarean section for the Pasir Ris breeders around 2006, but there was a vet who charged only $250.

Low surgical costs attract more customers. The costings must be done carefully. Otherwise, the vet loses money for every Caesarean section done. In the end, there is no profits to buy new equipment or upgrade, leading to a poor impression of the Surgery. Young Singaporeans love the glitz and the decor and if the vet does loss-making surgeries, he or she will need the volume. But at the end of the financial year, the net profits may be a loss.

So I told Dr Daniel that it is best not to perform C-sections at $500 as the time taken and complexity of this surgery as compared to a spaying of a female dog is much longer. We let the home breeder go. The associate vets must be some economic sense in working in a private practice so as not to make loss-making operations.
Posted by toapayohvets at 3:43 PM No comments:


Posted by toapayohvets at 3:24 PM No comments:


Posted by toapayohvets at 3:18 PM No comments:

I had sent the dog back with a bag of U/D dry. "We can't sleep as he keeps scratching his ears and body the whole night," the wife said. I examined the dog. His right ear is swollen and full of paw scratches. His left ear had a few such marks too. Other than that he was OK.

"I prescribed U/D dry instead of canned U/D to save you money," I gave the usual anti-allergic injection IM and SC. "Since he is allergic to it, stop the feeding."

Coincidentally, a woman came in asking to buy 12 cans of U/D. She showed me a slip of paper with the case reference number.  "My daughter asked me to come and buy the food," she said.

"Usually I see a man coming to buy regularly," I said.
"He is my husband and is not free today."

As the dog had recurrent oxalate stones and had two operations. Now, with canned U/D, the dog has no urinary tract problems. "It is better not to eat dry food," the woman said. This case illlustrates that there is a younger adult who is alert and wanting to prevent a 3rd bladder stone operation and that is the daughter.

As for the Jack Russell, the wife said: "So troublesome."  I gave her 50% back for the opened U/D diet and advised her just to feed home-cooked food. She wanted the Canned U/D and took 12 cans. If there is allergy, I will take back the cans.
Posted by toapayohvets at 9:23 PM No comments:

Daughters of a Better Age

A good image will be well composed. Sunlight and contrast make it interesting.  Practise and practise. I was in a car and had a second to snap this image before the traffic light changes to green.  What do you mean by a "better age"? When is the age worse? 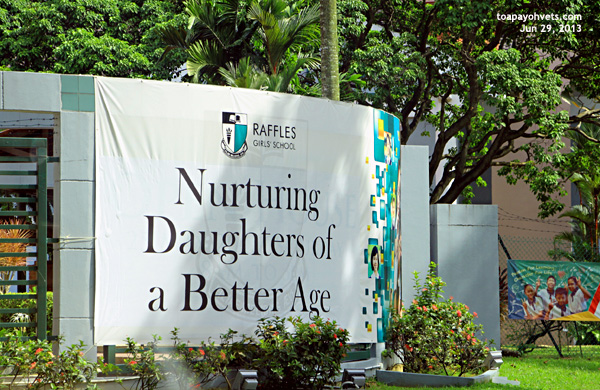 Posted by toapayohvets at 8:07 PM No comments:

Posted by toapayohvets at 8:01 PM No comments: