Yesterday Dec 14, 2012, I spoke to the lady owner about her hamster's tumour below the right ear. Dr Daniel had done electro-excision. For such small tumours and for ear warts, he was not in favour of electro-surgery. A scalpel blade would be just as effective. "No," I told him. But it will take time and patience for me to show that electro-surgery is useful in some hamster tumour excision.

I discovered that Australian vet students don't get lectures on hamsters as nobody in Australia is allowed to keep hamsters as pets! So, a vet graduates without any hamster lectures. This happened to me as a vet student in Glasgow University in 1969-1974. My professors did not mention the "hamster" word too! But in Singapore, many dwarf hamster owners are around although I don't know how many.

I would have taught dwarf hamsters are dumb. But this Indian lady in her 40s told me that she had 3 hamsters and they were clever creatures. Hamster No. 1 was bought 2 years ago against her father's objection of keeping any pets. The older generation of Singaporeans deemed pets as a waste of money when so many people are starving i this world. Yet 2 weeks later, the retiree father was very fond of this hamster. Hamster No. 2 was bought from another place. This hamster was the most intelligent. He would not try to escape or hide under fridges. When placed on the dining table, he would inspect the dishes of the adults and then go to his own plate to eat his food. I saw her mobile phone video of this hamster on the dining table.

Presently, Hamster No. 3 with the tumour on the skin below his right ear. He would show his anger by climbing up the crate's railing and jumping down or refused to come out from his house. For example, if he was not given the correct brand of brand. "He likes only Gardenia," the lady told me. "If I give him another brand, he would go wild and climb up the railings and jump down many times."
The lady continued: "On another occasion when I used the pink colour of the cottony bedding instead of blue, he would scatter the pink ones and would not settle down. I had to go to NEX shopping mall to buy the blue ones."

"Every morning, my sister had to tell him that she is going to work as he rushes out excitedly to greet her," the lady said. "He even knows when my sister is coming back from work as if he has a clock."

"Do you believe in reincarnation?" I asked.
"Sometimes I think our relatives have been re-incarnated as hamsters."
She could narrate more stories and such stories should be recorded in audio as the flavour of the actions of Hamsters 2 and 3 could not be captured in  text.

1. Weight 69 g. The 2nd heaviest in the last 3 days since the black and white one we operated upon was 71 g.
2. Zoletil 50 IM not 100% effective. "Top up with isoflurane gas," I advised.
3. Electrosurgical excision was in <1 bleeding.="bleeding." nbsp="nbsp" no="no" second.="second.">4. A 3rd-year student for 2013 studies from Melbourne Univ was on internsihp for 2 weeks and I have asked her to  write about this electrosurgery in the dwarf hamster. The hamster with the ear growth was also operated using electrosurgery. 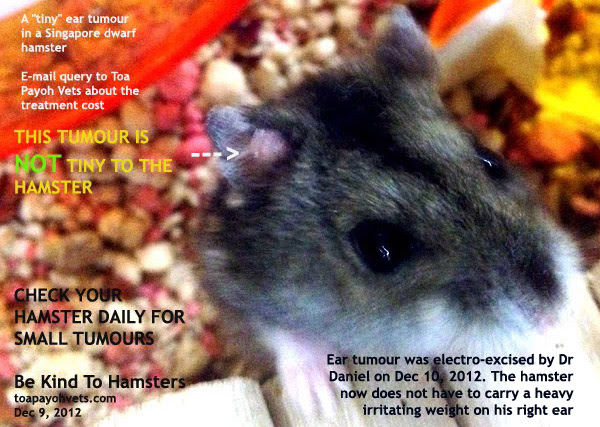 Website and updates will be done later at www.toapayohvets.com --- goto hamsters.


Posted by toapayohvets at 8:12 PM